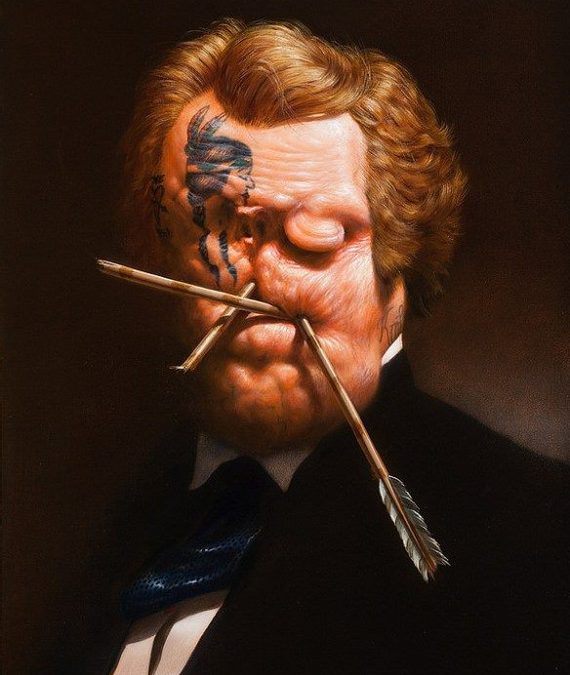 “Nurtured in freedom and taking their time, there is something dreadfully uncanny about philosophers, something either monstrous or godlike, or, indeed, both at once.” ~Simon Critchley

The following thinking tools are the self-inflicted philosopher’s bedrock. They are cornerstones with the potential to become the philosopher’s stone with the right amount of practice. Let’s break them down…

“The need for mystery is greater than the need for an answer.” ~Ken Kesey

The purpose of self-interrogation is to be ruthless in your inquiry, despite fear. It’s using the question mark like a scythe that cuts through all redundancy. It’s being fierce in the face of willful ignorance. It’s grilling your worldview to the point that it collapses in on itself and you’re forced to build all over again and form a fresh perspective.

Self-interrogation is going all in on being skeptical and circumspect. It’s transcending the need to cling to petty beliefs. It’s rising above faith and onto the wings of reason. It’s taking an idea or concept into deep consideration and then letting it go. It’s surrendering knowledge to truth. As Aristotle said, “It is the mark of an educated mind to be able to entertain a thought without accepting it.”

“A thing is right when it tends to preserve the integrity, stability, and beauty of the biotic community. It is wrong when it tends otherwise.” ~ Aldo Leopold

Eco-moralism is developing a soul-centric (as opposed to an egocentric) perspective regarding our relationship with the natural world. It’s the balls-to-bones understanding that everything is connected; that we are Nature and Nature is us. It’s honoring the earth as a sacred community to which we all belong, rather than viewing it as a commodity which can be owned.

Ecological morality is humanistic morality. The self is as much the world as the world is the self. Falling in love with the earth is falling in love with yourself. There is no separation when you are truly honoring the cosmos from a self-as-world/world-as-self perspective. It’s all interconnected cosmos. Those who cannot see that are the only ones who are truly disconnected.

In the crashing plane of our civilization, the healthy, eco-moral, soul-centric person, puts the mask (healthy lifestyle) on themselves first, so that he/she can be a guide to others who are not as capable of seeing how nature and the human soul are one.

What happens when a new, healthier delusion comes along to challenge our outdated, unhealthy delusion? Cognitive dissonance is usually what happens. But not with McGee’s Guillotine in your arsenal.

McGee’s guillotine is an addendum to Occam’s razor. It’s a remedy for the cognitive dissonance that ails us all. Its single task, and raison d’etre being: worldviews should not be aggrandized unnecessarily, therefore when you’re faced with two competing worldviews that oppose each other, the healthier one (valid and in accordance with universal laws) tends to be the correct one, and the unhealthier one (invalid and less in accordance with universal laws) should be learned from and then discarded.

McGee’s Guillotine chops away the ignorance of opinion and replaces it with the natural dictation of universal law so that a valid opinion can then be reinserted. It goes beyond shedding the superfluous and cuts the human head (codependent ego) out of the equation, so that a new, healthier head (interdependent ego), can grow back—open-minded and non-dogmatic, flexible and elegant, confident and logical in its continual self-overcoming of the original equation.

“We need shamans, and if society doesn’t provide them, the universe will.” ~Joe Lewels

Disaster shamanism, or apocalyptic shamanism, is a postmodern form of shamanism that heals disaster situations through shamanic cosmology and ecopsychology. It is a shamanic response to apocalyptic times. It’s an interdependent dance against the fragile rigidity of the codependent state.

A Disaster Shaman is a force of nature first, a person second; a fierce combination of the Shadow and Hero archetypes with a healthy dose of Trickster humility mixed in. The combination of these archetypes creates a particular flavor of nontraditional shamanism that spearheads healthy Cosmic Law into the unhealthy lawfulness that surrounds us.

Disaster shamans sow radical revolution in order to reap progressive evolution. They are a bridge between worlds—between the unhealthy, disconnected, sick society and the healthy, interconnected cosmos.

Hero expiation is the expiation of wealth. It’s the prestigious spreading of wealth in order to keep the tribe (society) healthy. It’s a deep understanding that wealth and health are diametrically linked and utterly reciprocal.

We must update the stories we tell ourselves. “Get rich or die trying” is outdated and unhealthy. So is the story: “It’s cool to hoard wealth.” These are failed stories. It is our responsibility, all of us, to update these stories and not fall for them anymore. We must be the checks and balancing mechanisms for each other’s power.

Let’s update the story. Like maybe the following… Get healthy or die trying. It’s cool to expiate power. Prestige is the new wealth. Sharing is honorable. Keep the tribe healthy.

Yes. In order to update our current sick society, we must practice cooperation over competition, people over profit, health of the tribe over personal wealth. If we don’t, then we are doomed as a species. It really is that critical.

“Fate leads the willing and drags along the reluctant.” ~Seneca

Unlike her twin sisters ‘Being for-itself’ and ‘Being in-itself,’ Being-in-fate embraces unexpected change. It launches us beyond good and evil, beyond rightdoing and wrongdoing, and lands us in a field of healthy and unhealthy drinking tea with Rumi and beer with Nietzsche.

Being-in-fate is going all in on life. Full surrender. Full disclosure. It’s embracing change, honoring destiny, and falling in love with fate. It’s living life full-frontal, with courage in your heart and your heart on your sleeve, pulsing like a beacon of hope.

There is more to life than choice, there is vicissitude and how we respond to it. Life is less about getting what we want and more about making the best of what we get.

“If you meet The Buddha on the road, kill him.” ~Linji

Why kill the Buddha if we meet him on the path? Because any Buddha claiming to be the Buddha is false. Any Tao claiming to be the Tao is not the Tao. Similarly, we should kill our notion of self-mastery in order to continue improving our mastery; so as not to get stuck, or hung-up on our expertise. Think of it as a kind of recycled mastery, where we recycle the mastery of yesterday into the remastered mastery of today.

Recycled mastery is the realization that learning is not linear, but exceptionally cyclical. It’s not merely about accumulating facts, but about internalizing the relationships between bits of information and then surrendering the experience to cyclic genius.

Uncontaminated by belief systems, those of us who have recycled our mastery reject the imagined boundaries that falsely divide people and ideas, and instead work to expand horizons.

We borrow, transform, and gift. We honor the birth-death-rebirth process. We learn, unlearn, and relearn. We condition, un-condition, and recondition. We blend thesis with antithesis and create a synthesis that launches us into meta-synthesis. We master, recycle, and remaster.

Recycled masters keep the gas-pedal on self-interrogation. They keep questioning all the way. Beginner’s Mind is their relentless sidekick; their constant co-pilot. They keep recycling themselves, reinventing themselves, overcoming themselves. Because, as Scott Adams said, “Awareness is about unlearning. It is the recognition that you don’t know as much as you thought you knew.”