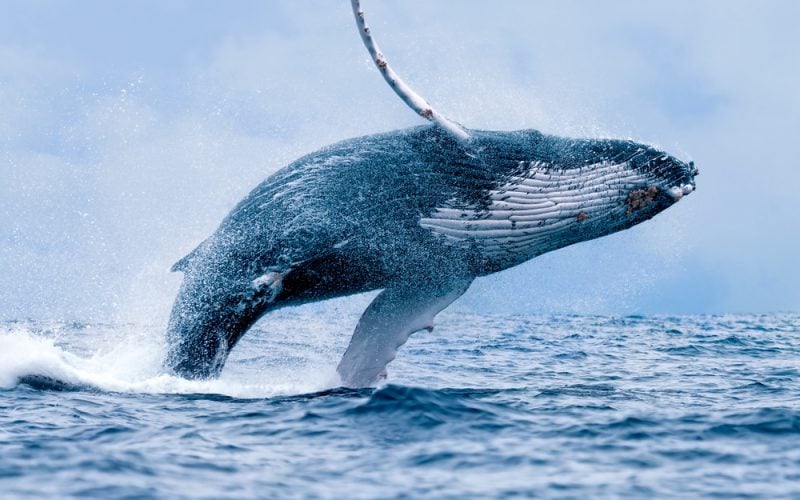 BY ARJUN WALIA
Image via Shutterstock

Fragments of plastic have been found almost everywhere in our oceans.  24.4 trillion pieces of microplastics pollute the world’s upper oceans. They have a combined weight of 82,000 to 578,000 tons which equals approximately 30 billion 500-ml plastic water bottles worth of plastic.

It’s a huge problem, and marine life has been affected for quite some time. Perhaps this is why these microplastics have also been found inside human organs and blood.

A new study has found that Blue whales consume up to 10 million pieces of microplastic every day, posing a dangerous situation for the worlds largest largest animal than previously thought. The study was recently published in Nature Communications.

A US-led research team put tags on 191 blue fin and humpback whales that live off the coast of California to observe their movements. The whales mostly fed at depths of between 50 to 250 meters (165-820 feet), which is home to the greatest concentration of microplastics.

The researchers then estimated the size and number of mouthfuls the whales had daily, including what was filtered out, and modelled three different scenarios. Under the most likely scenario, the blue whales ate up to 10 million microplastic pieces a day. Over the 90-120 day annual feeding season, that represents more than a billion pieces a year.

Do You Eat Seafood?

We already know that humans ingest and inhale microplastics, up to 121,000 microparticles per year for an adult, or as one controversial “comparison” puts it, the equivalent of a credit card (5 grams) per week.

Since a new process to detect plastic microparticles accumulated in the human body was accepted by the scientific community in 2020, studies confirm a number of shocking conclusions:

Health issues in humans and animals these days are complicated. They are no doubt multi-factorial in many cases. The next step here is to determine how much and how these microplastics can impact human health and what role they are playing in the declining health of the global population.

There are multiple solutions available. One popular initiative is called The Ocean Cleanup. Their floating systems are designed to capture plastics ranging from small pieces, just millimetres in size, up to large debris, including massive, discarded fishing nets (ghost nets), which can be tens of meters wide.

Modeling predicts that they need around 10 full-size systems to clean up the Great Pacific Garbage Patch. After fleets of their systems are deployed into every ocean gyre, combined with source reduction, The Ocean Cleanup projects to be able to remove 90% of floating ocean plastic by 2040.

You can learn more about them here.

If the world wanted to, it could easily solve these issues. We could stop manufacturing products and creating plastics, and use more sustainable harmless materials like hemp, for example.

We have so much potential and so many solutions available, but we rely on big money, big politics and big business to solve these solutions. We rely on a corrupt system that incentivizes bad behaviour in order to make more money and gain more control in the marketplace. We are in essence stuck in a race to the bottom trap within our existing economies and the worldviews that run them

We have a “green washing revolution” that is driven by big business and profit as opposed to really focusing on cleaning up our planet. The big shift here is going to be in changing our relationship to life, one another, and our planet. This is key as opposed to the material reductionism that guides the vast majority of our current culture

We made a short documentary a couple of years ago year called Regenerate: Beyond The CO2 Narrative. After 11 years of researching and investigating climate change, we came to many conclusions that we felt needed to be shared, yet were extremely rare in public discourse.

One of the most important aspects of Regenerate is that we are looking at our environment from such a limited point of view that we can’t identify the real issues we face, and that our level of thinking, or consciousness, is completely disconnected from the solutions required to truly shift our relationship with earth.

How to Build a Better Community?