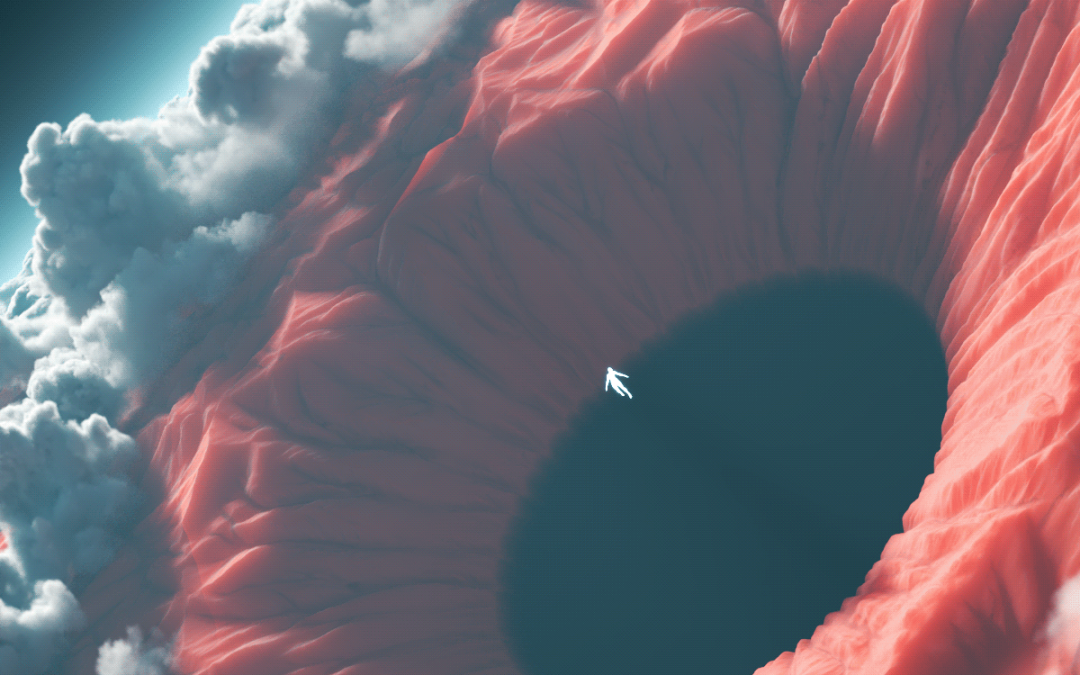 “We are caught inside a mystery, veiled in an enigma, locked inside a riddle.” ~Terence McKenna

In short: we must remythologize mystery, dare to lift the veil, and courageously turn our own riddle against the universal riddle. Let’s break it down.

Caught inside a mystery:

We are all driving blind through an impossibly complex maze that we all know ends in a head-on collision with a wall. Existence set us up to fail. So, when it really comes down to it, the real question is: do we fail greatly or poorly? Do we enjoy the challenge of the maze, with all its ups and downs, tragedy and majesty, trial and error? Or do we balk, defeated and demoralized, and filled with regret and self-pity?

Guilt and regret are unnecessary. They are gasoline poured on the fire of unchangeable circumstance. They are just an added layer of unnecessary suffering. We can’t control the fire, but we can control how we react to it. Better to roast marshmallows over it in good humor than pour gasoline over it in angst. Better to suffer greatly than to suffer poorly.

Suffering greatly is allowing naïve, innocent, and ignorant mythology to die and then creating updated, innovative, wise mythology out of it. Suffering poorly is clinging to naivete, innocence, and ignorance and never taking a leap of courage out of faith and into fortitude.

Myths have the ability to link the everyday to the eternal, to give meaning to the mundane. We are mythological creatures. We need myth like we need food. But myths must change to remain digestible, relevant, and empowering enough to keep us ahead of the curve of a fallible human condition and an indifferent cosmos.

Remythologizing mythology itself is a way to stay ahead of the curve.

Mythmaking is world-building. When you are a world-builder, you are equal parts divining rod and lightning rod. You’re able to open-up to unexpected music, poetry, and art, following intuitive hunches and looking for primordial signs in all domains of thought. The third eye blasts open.

Most of all, you’re able to build upon this teleology in an attempt to move your personified Fibonacci sequence (striving finitude) ever closer to the unreachable Phi (enlightenment). You are able to explain the numinous through the primal medium of storytelling, art, and myth.

Mythmaking is sacred reach. It’s a way of realigning our unhealthy cultural story with the healthier cosmic story. It’s a way of transforming the dogmatic into the enigmatic. It helps others realize that remaining enchanted and maintaining our awe regarding the Great Mystery—rather than vainly trying to pigeonhole it into man-made laws—is always the truer providence.

Veiled in an enigma:

“We are asleep. Our Life is a dream. But we wake up sometimes, just enough to know that we are dreaming.” ~Ludwig Wittgenstein

If, as Maya Angelou said, “Without courage you can’t practice any other virtue consistently,” then it stands to reason that we allow courage to be the bedrock of our excellence. Without the initial leap of courage there is no freedom. Hence, there can be no excellence. Without courage, one is merely restricted to the conventional, inhibited by the whims of others, imprisoned inside the box of the status quo, and hampered by outdated reasoning. Without courage, the third eye remains calcified, hard, blind.

But unlike the caterpillar which acts on instinct to create its cocoon, the human animal must act on courage to create their cocoon phase. This requires a leap of courage out of faith and into fortitude. Three leaps, in particular: the courage to question the self, the courage to destroy the self, and the courage to rebirth the self.

Proactively stretching our comfort zone, tearing the veil, taking a leap of courage and making little changes here and there keeps us ahead of our destiny and manifests adventure.

It is the difference between being the change you wish to see in the world and expecting the world to change without personal sacrifice. The former will always be superior to the latter. Sure, it’s risky. But healthy progress always is. As Kierkegaard profoundly stated, “To dare is to lose one’s footing momentarily. Not to dare is to lose oneself.”

Dare to lift the veil. This means going Meta. Take a distanced approach to yourself. Detach yourself from yourself. Play with appearances like a juggler juggling personas. Become many different people. Be a chameleon—Protean, adaptable, fluid—susceptible of reflecting the atmosphere around you. With such a flexible approach to all appearances, you will lose a lot of the heaviness that weighs most people down. You will become a mirror: the heart of the third eye.

Losing heaviness is the first step toward lightheartedness and a good sense of humor. With a light heart we are able to float over misery. We become detached enough from direct experience to reveal the wizard behind the curtain. We become much needed medicine—vital, primal, and primordial. We make the darkness lighter. We dim the too-bright lights. We lift the burden of seriousness that we’ve become so accustomed to. We reveal alternative ways of being human in the world.

Locked inside a riddle:

The almighty riddle we are locked inside is the indifferent universe. The universe is utterly indifferent to our deference. And yet we have no choice but to defer. Or do we? Is there a way to flip the script? Is there a way to gain a sense of humor so powerful that it gets power over power itself? Yes. We must gain the radical humor of stoic indifference.

Stoicism teaches us how to accept the conditions of an indifferent reality and then one-up it with our own indifferent attitude in return. Radical indifference compels us to detach. In our detachment we see how everything is attached. We see how the riddle has us mesmerized. We break the spell by creating our own indifferent riddle despite. This is the power of meaning creation, and the essence of grace and serenity.

As Henry Miller said, “Serenity is when you get above all this, when it doesn’t matter what they think, say or want, but when you do as you are, and see God and Devil as one.”

When you get above it all—all the pettiness, all the petty placation, all the woe-is-me pity, all the codependent expectation—you become enigmatic, otherworldly, heroic. You are able to untie Gordian Knots, square circles, flip scripts, turn tables, and reimagine Imagination itself. Your indifference in response to the universal indifference creates transcendent interdependence. The third eye blasts wide open, bloodshot and thirsty from having pretended to be asleep for so long.

Between indifference and deference there is a third thing: imagination. As Nietzsche said, “No artist tolerates reality.”

Imagination is that place where, as Jung intuited, “reason and understanding unite with unreason and magic.” It’s a transcendent state. It’s where Einstein rode on a photon of light. It’s where Prometheus stole fire from the gods. It’s where the pen is mightier than the sword.

Reimagining imagination is radical indifference. It’s creative self-overcoming. It’s embracing process over progress. Focusing on the process keeps us grounded. It keeps us action-oriented rather than results-oriented. It keeps us from taking ourselves too seriously. But it also keeps us between worlds. It keeps us flexible, adaptable, and detached.

When we achieve an indifferent state of reimagined imagination, we’re in an open-minded state of process over progress. We’re in Flow. We’re in the zone. We’re woolgathering black sheep transcending sheepishness. We are the personification of reconciled opposites—the ultimate catalyzing agent—within whom summit and abyss, shadow and light, life and death, are united

Thus, we liberate our third eye. We free ourselves up for further freedom. We gain perception beyond ordinary sight.

This article (Breaking Open the Third Eye) was originally created and published by Self-inflicted Philosophy and is printed here under a Creative Commons license with attribution to Gary Z McGee and self-inflictedphilosophy.com. It may be re-posted freely with proper attribution, author bio, and this statement of copyright.