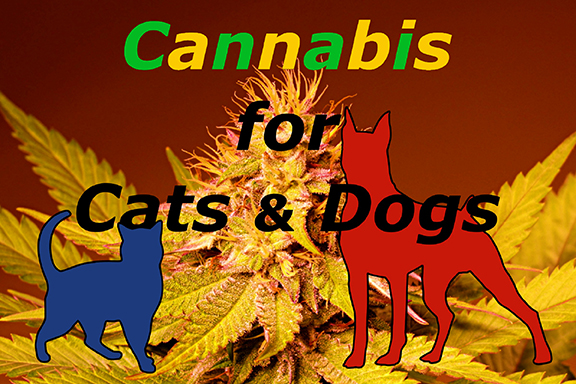 Cannabis is a fertile source of novel therapies that have the potential to address numerous ailments suffered by humans. Specifically, Cannabis has the capacity to treat tumors, pain, soft-tissue inflammation, neuroinflammation, seizures, anxiety, oxidative stress, insomnia and more. These medicinal influences tend to be effectuated through the endocannabinoid system. The endocannabinoid system regulates cognitive processes and physiological functions throughout the body. And, via Cannabis-induced endocannabinoid modulation, a variety of new therapeutic strategies are emerging. So, there’s a growing body of evidence that validates human benefits, but what about Fluffy and Fido?

As with humans, the endocannabinoid system plays a critical role in regulating biological functions in our animal friends. Further, animals tend to suffer from maladies similar to those experienced by humans, so there should be no surprise that Cannabis is also a viable source of new medicines for pets. Research in this area of Veterinary Medicine is still very limited, but the prospect of developing new Cannabis-based treatment options is promising.

As measured by the combined CBD + CBDA content, the dogs were given 2.0 mg/kg of the CBD (CBD + CBDA) oil, every 12 hours, over 4 weeks. Using the Canine Brief Pain Inventory and Hudson Activity Scale, Gamble found that both pain and activity rapidly improved. By week 2, pain reduced by 33% and mobility improved by 28%. These benefits were maintained through week 4 (trial completion). No physical side-effects were detected; however, elevated alkaline phosphatase was measured in some dogs.

Brioschi et al (2020)recruited 21 osteoarthritic dogs and separated them into either a CBD or Control group. Throughout a 12 week trial, both groups were given the same analgesic/anti-inflammatory drug combination (firocoxib or prednisone, with both gabapentin and amitriptyline); in addition, the CBD group was given a CBD isolate:

As Brioschi reported, “No relevant changes in the measured blood cell count and serum biochemical analysis were noted in either the CBD or C groups at the end of the twelve-week evaluation period.”She further stated,“In all dogs, oral transmucosal CBD administration was well tolerated, with mild or absent gastrointestinal side effects.”Specific adverse events noted:

Despite mild side-effects, the medicinal results induced by the CBD isolate were significant and ultimately enhanced the subjects’ quality of life.

Although the dogs in the CBD group experienced a 33% median reduction in seizure frequency, McGrath contemplates whether a higher dose would further reduce seizure activity. No behavioral side-effects were observed, but subjects in the CBD group exhibited a significant increase in serum alkaline phosphatase activity.

Although Cannabis/CBD medicine is not yet authorized for use in a Veterinary setting, a CBD-based feed supplement has been approved for use in the European Union. Anibidiol is marketed as having the capacity to:

And, as underscored in the Anibidiolleaflet, “Veterinarians have good experience in using this product for behavioral problems, pain, infection, epilepsy and the consequences of tumors in dogs and cats.”

Corsetti et al (2021)secured access to 24 shelter dogs and separated them into either a CBD or Control group, for a 45 day trial. Prior to each morning meal, the 12 dogs in the CBD group were given CBD-infused olive oil and the 12 dogs in the Control group were given an olive oil placebo. Various behavioral disorders associated with stress were recorded throughout the trial:

Upon completion of the trail, behavior disorders in both groups remained unchanged except for aggression. Among the dogs in the CBD group, aggressive behavior towards humans decreased significantly.

The cause of feline cognitive dysfunction (FCD) is unknown, but Zadik-Weiss et al (2020)speculates that it’s similar to the neurological decline observed in Alzheimer’s patients. As with Alzheimer’s, FCD is typically age-related. Cats over the age of 11 may exhibit:

Currently, a clinically validated therapy that protects aging humans from Alzheimer’s hasn’t been developed. There are only treatments that manage symptoms. And in cats, registered medications designed to manage FCD don’t exist. Some success in treating FCD has been observed in off-label applications, but cats have difficulty tolerating conventional pharmaceuticals. However, Zadik-Weiss feels a viable solution may be found in a new CBD therapy.

Numerous studies have validated the capacity of cannabinoids to reduce neuroinflammation and oxidative stress. And, there’s growing evidence that various cannabinoids – alone or in synergistic combination – may provide the neuroprotective utility necessary to treat neurodegenerative diseases such as Alzheimer’s. Astonishingly, Martin-Moreno et al (2011)and Cheng et al (Marchand May, 2014)have demonstrated that CBD canprevent and reverse the development of Alzheimer’s-like cognitive deficits. Given this rapidly growing body of knowledge; the similarity between Alzheimer’s and FCD; and the relatively benign nature of Cannabis, Zadik-Weiss advocates for trials designed to explore the effect of CBD in cats suffering from FCD.

Although cats and dogs metabolize the magic flower differently, Deabold et al (2019)feels CBD is safe for both. She states, “hemp-based CBD appears to be relatively safe in healthy populations of dogs and cats.” Deabold found the results of serum chemistry analyses to be “comforting.”However, given the newness of CBD-based therapies, she also urges monitoring liver enzymes in cases of long-term treatment. Deabold further expresses a need to study interactions with currently accepted pet-approved drugs.

As detailed above, 2.0 to 2.5 mg/kg of CBD every 12 hours appears to be efficacious and is generally free of side-effects. CBD therapy is well tolerated and when side-effects are experienced, they’re easily managed. Typical side-effects include:

If adverse reactions occur, they can be mitigated by reducing the dosage and/or discontinuing treatment. Of note, researchers have found that dogs have the capacity to develop a tolerance that can result in diminishing side-effects without modifying dosage.

If you’re thinking about Cannabis therapy for your fur baby, consider the following:

SuperFunker is a Researcher, Writer and Designer with extensive experience in exploring medicinal Cannabis, horticulture lighting and health/fitness. Additionally, SuperFunker has recently designed a novel artistic impression of the THC:CBD molecules. The image is known as the ElixirSymbol© and it’s available on various RedBubble items.