Disconnected from Reality: How Smartphones and Social Media Create a Schizophrenic-Like State 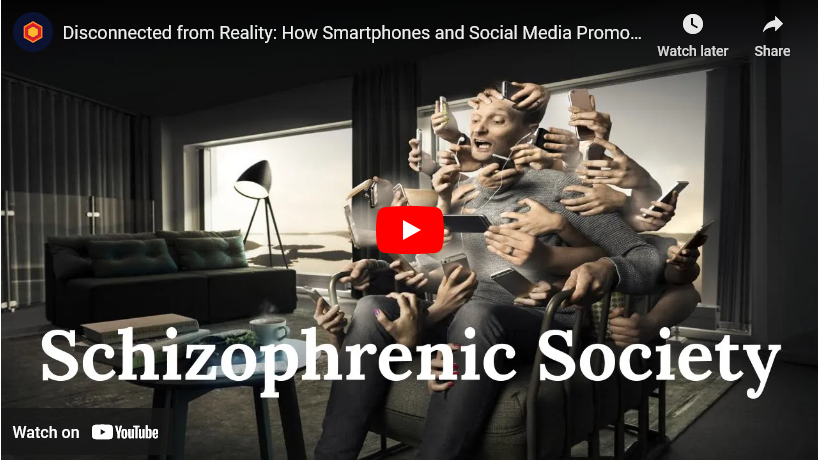 Disconnected from Reality: How Smartphones

The following is a transcript of this video.

“I am body entirely, and nothing beside.”

Many people spend more time staring at screens, than interacting with the real world. Hour-upon-hour, day-after-day, it is just eyes and ears that act as inputs, and mouths and fingers that act as outputs. We are a population, in the words of the author Matthew Walker, whose “minds are elsewhere than our bodies” (Matthew Walker, The World Beyond Your Head) In this video we are going to explore how excessive use of screen-based technologies, be it televisions, computers, smartphones, or social media, disconnects us from our body and pushes us toward a schizophrenic-like manner of experiencing the world.

“The distinction between mind and body is an artificial dichotomy. . .The continuity of nature knows nothing of those antithetical distinctions which the human intellect is forced to set up as aids to understanding.”

In a state of optimal health, we are firmly rooted in our body, and body and mind are experienced as a unitary phenomenon, not as separate entities. However, the connection between the body and the mind can become disrupted and when it does, we say that one is disembodied. In a state of disembodiment, we do not feel that we are a body, but that we possess a body. Instead of being firmly rooted in our body, we feel alienated from it, and we tend to view the body not as an integral part of our selfhood, but as a thing, or collection of things, that we carry around with us.

Screen-based technologies have altered the dominant mode of sensory perception in our society and in ways that promote disembodiment. For these technologies have placed us on a trajectory where sight reigns supreme over all other senses. We have become, in other words, an ocularcentric society, and as Giovanni Stanghellini and Louis Sass explain in their paper The Bracketing of Presence:

“In [an] ocularcentric [or sight-centred] society, not only does the individual become a passive receptor of images coming from the media; relationships between people also come increasingly to be mediated, even produced, by images. The other becomes an image for me – and I an image for the other. In such a society, the more embodied, participatory, and “immersed” kinds of visual experience are replaced by passive forms of “seeing”: a disembodied witnessing of mere images and representations.

Giovanni Stanghellini and Louis Sass, The Bracketing of Presence

No longer are social interactions primarily between men and women in the flesh-and-blood, as was the case for practically all human history. Now pictures, videos, strings of text and emojis, such are the disembodied forms of representation that define many of our relationships.

“Everything that was directly lived has receded into a representation.”

Guy Debord, The Society of the Spectacle

Screen-based technologies have also led to a surge in forms of work and pastimes that sever the connection between body and mind. A lot of us spend upwards of 8 hours a day staring at a screen and tapping on a keyboard or mouse as the rest of our body stays stationary. In our leisure we take part in activities such as playing video games, watching Netflix or sports on TV, browsing the internet or scrolling social media feeds, all activities that are mind rich and body poor.

In the last few years there has been a further accelerant added to the disembodying trends of modern society, namely, lockdowns and the fear of COVID, or as Sass and Stanghellini write:

“Sight is usurping touch. Images are deposing bodies. Virtuality is replacing reality. . . And now the fear of being contaminated by the COVID virus has further reinforced the tendencies toward decorporealization, dematerialization, and social isolation, at least in terms of body-to-body relationships.”

Giovanni Stanghellini and Louis Sass, The Bracketing of Presence

Instead of working in the presence of others and attending face-to-face meetings in the flesh, lockdowns forced many into remote work and a reliance on the disembodied video chat. Some people became so afraid of other people that social events over video became the norm. Children were conditioned to fear playing with friends and even doctor’s visits were done remotely. While some have overcome this neurotic fear of other people in the flesh-and-blood, others are still petrified and remain working remotely, socializing with images and taking part in pastimes that lack the presence of real people.

A severing of the connection between body and mind is disorienting and leads to a myriad of life problems. To understand some of these we can turn to the condition of schizophrenia which as Louis Sass and Elizabeth Pienkos write, consists of an “extreme disembodiment, a sense of radical separation from one’s own being as a physical entity” (Louis Sass and Elizabeth Pienkos, Varieties of Self-Experience).

Firstly, disembodiment affects movement. When disconnected from the body we do not move in the graceful manner that signifies health, but in a jerky and rigid manner:

“. . . literal jerkiness of body movement is already found in the prodrome to schizophrenia (ie, before the illness is manifest)”

Disembodiment also disrupts the ability to tap into the power of the intuitive self. Intuition is knowledge or wisdom which is not preceded by chains of explicit thought or reasoning. Instead, intuition occurs in flashes of insight, or wells up through physical sensations in the body. For example, we may have a gut feeling or butterflies in our stomach. To access our intuitions, we must be firmly connected to the body and capable of sensing the physical signals that emanate from it, or as Iain McGilchrist explains:

“Even if [intuitions] manifest as cognitive, they are embodied, in the sense that they are both informed by and inform the motion of our limbs, our breathing and pulse, the emotion of our heart and gut and mind, together with alert perception, and intelligent insight, all manifest in interaction with, rather than abstraction from, the world.”

“. . .a loss [of common sense] is perhaps the most invariable accompaniment of schizophrenia, in such patients, a return of common sense. . .if it can be procured, is a sign of recovery. . .”

Lacking common sense, the schizophrenic, will turn to overthinking as a replacement. The schizophrenic mind, in other words, runs wild in a state of hyper-awareness as they consciously process information that for others is dealt with implicitly with the power of intuition and common sense, or as McGilchrist writes:

“. . .schizophrenics attempt to compensate for a loss of intuition [and common sense], of that vital, pre-reflective grasp of reality, by a sort of pseudo-philosophising, or ‘hyper-reflection’ on experience – essentially a disease of over-awareness, in which things that should run smoothly at the preconscious level are yanked into the focus of awareness, where life comes to a juddering halt.”

It is not just the schizophrenic who over-thinks in response to a lack of common sense, rather this cognitive style, albeit in a milder form, has spread throughout the population at large. Disconnected from the body many of us rely too little on its intuitive wisdom and lean too heavily on the power of consciousness:

“The growing consciousness is a danger [and] a disease.”

These disembodying social trends, fueled by the excessive use of screen-based technologies, are not leading us in a positive direction. If allowed to progress in the direction of a virtual world, or a metaverse, where representations flood all our senses, we may reach the point where the representation becomes more important than the reality behind it. Or to quote the German anthropologist Ludwig Feuerbach we will become a society who “prefers the sign to the thing signified, the copy to the original, representation to reality, appearance to essence” (Ludwig Feuerbach, Preface to the Second Edition of The Essence of Christianity). In 1962, when screen-based technologies were still in their infancy, Daniel Boorstin saw such a dystopic society begin to form in-embryo, and as he warned:

“We suffer primarily not from our vices or our weaknesses, but from our illusions. We are haunted, not by reality, but by those images we have put in their place.”

In a world where the image and representation are more important than the reality of what is signified, man will become increasingly disembodied and so move further down the spectrum of a schizophrenic-like condition. However, unlike the schizophrenic we live in this disembodied world of our own accord. We choose to take part in the activities that disconnect us from our body, and we choose to do it for hour-upon-hour, day-after-day. But we can make different choices. We can increase the amount of time we spend with people in the flesh-and-blood, take part in pastimes that use more than just eyes, ears, and fingertips, and limit how often we stare at screens. And for those who choose more of the real over the virtual, and who use more of the body in interaction with the real world, such a choice will be a step toward a revitalization of life, for as Nietzsche wrote:

“The body is a great sage, a Many with One purpose, a war and a peace, a flock and a shepherd … There is more sense in your body than in your best wisdom.”