Drums Not Guns by Nowick Gray 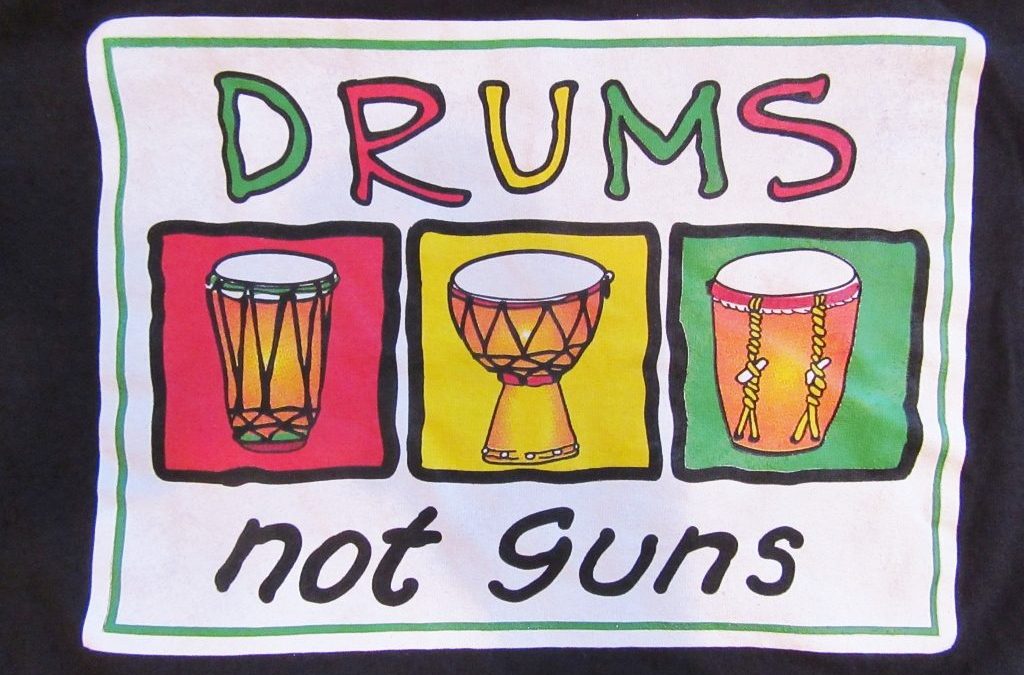 For news followers out there, you’ll recognize guns is a big issue these days, on a couple of fronts. In Canada and the US, legislators eager to control are quick to parlay random acts of violence (or covert operations) into depriving the citizenry of its means of armed resistance, rebellion or defense. Abroad, billions in weaponry is shipped to Ukraine, among other client states, to advance the cause of world empire: under the latest brand name, the Liberal World Order.

Guns are integral to the maintenance of the modern state, whether the enforcement wing is dubbed military or police. When regime change is sought instead, arms are funneled to the appropriate channels, mercenaries, proxies, special forces. South of the border, cartel gangs call the shots, mafia in your face.

When I traveled to Belize, I met a Creole drummer, Emmeth Young, running a program for youth to attract them from gangs, and their logo says it all: Drums not guns. Hand drums are an appropriate choice especially for the young men who otherwise would be candidates for gang violence or army recruitment. The taut yet yielding drum skin absorbs their pain and anger, broadcasts their passion and exuberance. It focuses their attention to the mastery of time, and the surrender to a sacred space outside the whirl of politics and the rage of group rivalries.

The message of the drum is one of unity, composed of diversity fully expressed and integrated. To play the instrument marries body and mind, emotion and spirit. It rewards listening and exposes ego. Service to the wave of energy allows the energy to give back: enlivening, creating dance, boosting endorphins, leaving conflict in the dust.

In traditional and tribal cultures, the drum was the heartbeat of community. The drummers and dancers were its humble priests and priestesses, with chant for liturgy, and a memory bible of rhythms and movements. Each piece too had a cultural referent; but today, in the wake of the homogenization of global culture, and outside of those ethnic remnants, we can still partake of the embedded magic of the drums’ synchrony. The collaboration among drums and drummers proves what is possible if we go out of the room full of guns, and choose the other door.