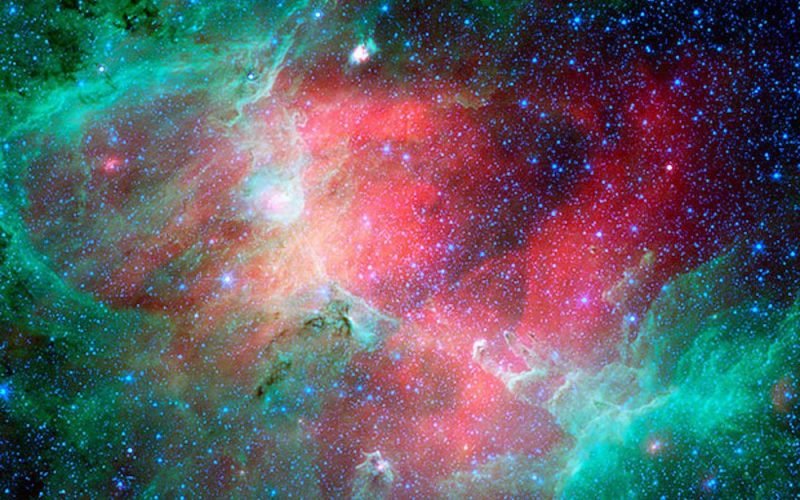 What is dark matter? The mainstream refers to it as a ‘hypothetical’ form of matter, and this rhetoric seems to dominate academia, despite many academics and others demonstrating that non-material substances like ‘dark matter’ should be considered as an actual form of matter.

“More is unknown than is known. We know how much dark energy there is because we know how it affects the universe’s expansion. Other than that, it is a complete mystery. But it is an important mystery. It turns out that roughly 68% of the universe is dark energy. Dark matter makes up about 27%. The rest – everything on Earth, everything ever observed with all of our instruments, all normal matter – adds up to less than 5% of the universe. Come to think of it, maybe it shouldn’t be called “normal” matter at all, since it is such a small fraction of the universe.”

Empty Space Is Not Empty

Other sources postulate that this dark matter makes up 90 percent of our reality, and it makes sense. Just look at the atom, the smallest observable piece of matter, it’s what everything else is made up of. An atom is almost all empty space, more than 99 percent of it to be exact. The kicker? That empty space is not useless, and from what we know now, “empty space” is really not “empty” at all. This is why I’ve stressed the importance in many of my previous articles of this famous quote from theoretical physicist John Wheeler: “No point is more central than this, that space is not empty, it is the seat of the most violent physics.”

If you’ve looked into dark matter, you might also be aware that what scientists refer to as the quantum vacuum might be mistaken for dark matter, or ‘dark energy.’ Also known to some as “ether” or “aether.”

“Space is actually not empty and it’s full of energy…The energy in space is not trivial, there’s a lot of it and we can actually calculate how much energy there is in that space and that reality might actually come out of it. Everything we see is actually emerging from this space.”

This idea was illustrated decades ago with the “Casimir Effect,” which demonstrates what’s called zero-point energy. Today, we are beginning to see that these concepts are not just theoretical, but instead, very practical. This is why it’s interesting to point out how multiple scientists have been expressing the idea that what dark matter might actually be mistaken for this ‘zero-point energy’ or ‘ether.’

Take for an example, this Defense Intelligence Agency unclassified document entitled “Warp Drive, Dark Energy & The Manipulation of Extra-Dimensions,” written and prepared for the agency by senior research physicist Richard K. Obousky, Ph.D. and Eric W. Davis, Ph.D. Again, the existence of the vacuum is not seen as trivial:

When it comes to dark energy being mistaken the document states the following:

The key phrases here are: “We do not understand why it exists or how it is created; we simply know it provides an ever-present force on spacetime, causing the universe to expand. Indeed, recent high-precision experimental observations indicate dark energy may be a cosmological vacuum energy.”

Some Call It The Ether

Nikola Tesla was very well aware of this substance/force at the turn of the 20th Century:

“All perceptible matter comes from a primary substance, or tenuity beyond conception, filling all space, the akasha, or luminiferous ether, which is acted upon by the life-giving Prana or creative force, calling into existence, in never-ending cycles all things and phenomena.”

He also believed that ether would one day be used to generate energy, and he was right. More on that later in the article, with examples.

“Ere many generations pass, our machinery will be driven by a power obtainable at any point in the universe. This idea is not novel… We find it in the delightful myth of Antaeus, who derives power from the earth; we find it among subtle speculations of one of your splendid mathematicians….Throughout space there is energy…it is a mere question of time when men will succeed in attaching their machinery to the very wheelwork of nature.”

Nikola Tesla, Journal of the Institution of Electrical Engineers

He was one of many, in fact, who had been contemplating the ether and its relation to what we perceive as physical material matter. In ancient times, Plato referred to the ether. This is from his work Phaedo:

“And upon the Earth are animals and men, some in a middle region, others (elementals) dwelling about the air as we dwell about the sea; others in islands which the air flows round, near the continent; and in a word, the air is used by them as the water and the sea are by us, and the ether is to them what the air is to us.”

Here is another interesting quotation from this ancient text:

And they allowed Apollonius to ask questions; and he asked them of what they thought the cosmos was composed; but they replied; “Of elements.”

“Are there then four?” he asked.

And how can there be a fifth,” said Apollonius, “alongside of water and air and earth and fire?”

“There is the ether.”

Even Rene Descartes proposed the theory that “space,” (what we perceive as empty space) is completely filled with matter in various states. There is evidence to suggest he was executed by the Church because his science entered into the realm of metaphysics.

What Descartes hypothesized is exactly what quantum physics is examining today. The words below come from the late Parahamsa Tewari, who recently had a paper published in Physics Essays. The paper is entitled “Structural Relation Between The Vacuum Space and The Electron. You can access the full study here.

“A century from now, it will be well known that: the vacuum of space which fills the universe is itself the real substratum of the universe; vacuum in a circulating state becomes matter; the electron is the fundamental particle of matter and is a vortex of vacuum with a vacuum-less void at the center and it is dynamically stable; the speed of light relative to vacuum is the maximum speed that nature has provided and is an inherent property of the vacuum; vacuum is a subtle fluid unknown in material media; vacuum is mass-less, continuous, non viscous, and incompressible and is responsible for all the properties of matter; and that vacuum has always existed and will exist forever….Then scientists, engineers and philosophers will bend their heads in shame knowing that modern science ignored the vacuum in our chase to discover reality for more than a century.”

Tewari also points out that dark matter has been mistaken for what it really is, as he describes in his “Space Vortex Theory”:

“The sketch below shows the Earth enclosed within a vacuum vortex. Unlike the ongoing concepts of vacuum to be “empty space”, “nothing-ness” and “Void-ness”, the Space Vortex Theory (SVT) defines the absolute vacuum to be a mass-less, continuous and incompressible fluid. The velocity fields in the underneath substratum (shown through directional arrows) create invisible forces to rotate the massive Earth around its axis and also carry the Moon in its orbit.”

“While the Earth is visible, the vacuum vortex substratum is invisible. This invisible substratum of cosmic energy, underneath and around the Earth, is mistakenly called “dark matter”. All planets and stars have similar vacuum vortices that rotate them axially. The vortices enclosing the galaxies impart axial rotation to their cores, as also the stars in them are carried in orbits. [Rene Descartes, the French mathematician and philosopher, predicted an Earth vortex and cosmic vortices of property-less fluid (Ether) in the 17th Century].”

“This paper presents a formulation of Absolute Principles for vacuum-space that enable revealing the process of creation of a stable electron and its known properties of mass and charge. Fundamental questions on the electron’s charge and mass are derived from first principles from the vacuum vortex of the electron’s structure. Also, generation of electrostatic, electromagnetic, and gravitational fields are shown to arise from the vacuum vortex structure of the electron. The electron and positron have been pinpointed to be the fundamental particles of matter.”

The interesting part about Tewari is that, from his theory, he took it out of the theoretical realm by generating machinery based on the science, in the form of an electrical generator. A prototype of the machine was tested by Kirloskar Electric, a manufacturer of electrical generators in India. There, it exhibited over-unity efficiency. You can watch a video of the machine below and you will see a demonstration of the machine as well as discussions towards the end of the video with the engineers at Kirloskar Electric.

Parahamsa Tewari. As seen in the video below.

Implications About Our Understanding Of Reality

The crazy thing is that it could explain where reality comes from; according to these scientists and others, it comes from ‘the ether.’ Perhaps consciousness is the next piece of the puzzle, but one thing is for certain, this goes well beyond the big bang theory.

This kind of science is huge and represents what we’re currently in right now, the next scientific revolution: the acknowledgement of non-material science and its empirical validation of spirituality and metaphysics. This is not theoretical stuff, it’s showing that we live in a spiritual world and our reluctance to accept this simple premise comes from the fact that we’ve been hit with the scientific dogma for a long time, preventing us from being open to ‘new’ concepts of reality that almost went lost but are once again discovering.

Another issue is that discoveries in this field simply conflict with many of our long held beliefs.