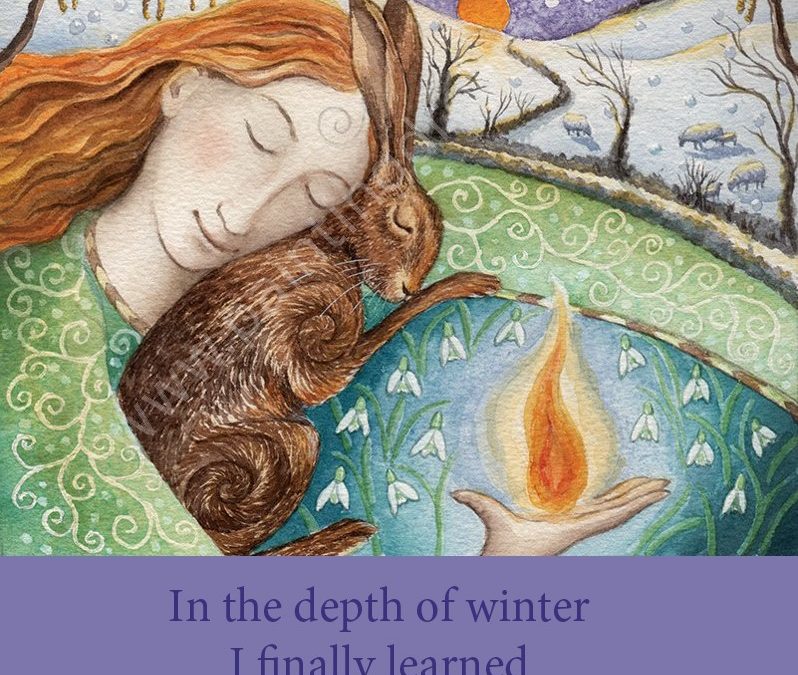 “The Christians stole the winter solstice from the pagans, and capitalism stole it from the Christians.” — George Monbiot 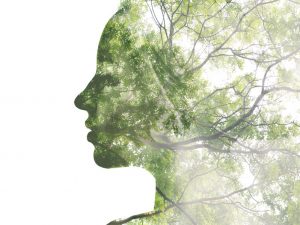 The Winter Solstice is approaching 19th-22nd of December. In the four day silence when the hours of darkness reach their peak, the Earth takes her in-breath. She breathes in the power of Sol Invictus – the Unconquerable Sun and a fire is kindled in the womb of our mother….the sap begins to rise and the One Life re-invents herself in all its green glory.

Many people who celebrate the winter solstice have ceremonies at the exact time the sun begins to move its first degree but according to shamanistic wisdom, the sun takes two days and two nights to reach its point of pause and another two days and nights before it is visibly in motion on its celestial journey back northward or southward depending on which hemisphere we live in.

Four is a sacred number. It is the beginning of all things made manifest. The Pythagoreans believed the number four, the Tetrad, was a perfect number. They taught that the Tetrad symbolized God which is interesting because the Lakota also associated the TobTob Kin the number four with Wakantanka-the Great Mystery or God.

Tobtob kin  2+2=4 is the sacred number of the Lakota, The magic number four.

All over the world the number four and its multiples are sacred numbers to indigenous people.  There are four directions or cardinal points, four elements that make up our world, four quarters of the earth, four seasons, four winds and four

races of man. Black, red, yellow and white.  The four elements earth, water, fire and air are inclusively surrounded by the element of space symbolized by a circle. To the Lakota the cangleshka wakan or medicine wheel is the sacred hoop of the nation….the red road or spiritual path of north/south and the black road of suffering, the east/west road where the heart is in conflict with emotion. At the centre point where the two roads cross the tree of life flowers. In three dimensions the medicine wheel becomes a four sided pyramid…an octahedral gateway to the fourth dimension. There is a wealth of wisdom encoded in the medicine wheel for those with the intuition to decipher it. 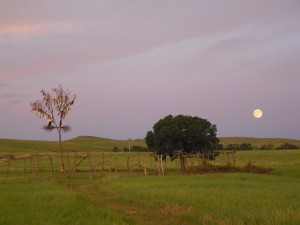 The TobTob Kin was referred to in Lakota understanding as Wakantanka – the great mystery. The foundation of all life, the rock, the stone, the earth upon which we stand and everything that lives on her.

In today’s bewildering dystopian reality where mandates, segregation and subjugation are the order of the day, it maybe a good idea to take a few minutes each day of the solstice to retreat from the consumer nightmare called Christmas and turn our attention inwards. This is called mindfulness… a re-alignment with earth’s cyclic rhythm.

Mindfulness means to be fully present. To be aware in the moment…in the Now… a state of active, open attention to the present. A moment by moment awareness of our thoughts, feelings, bodily sensations, and our connection to nature through a non judgemental lens. A state of awareness where we can observe our thoughts and feelings without judging them as good or bad.

The inclusive practice of being present, is opposite to the indoctrination of separation or exclusivity, we are taught by our peers and the educational system.  A dogma where the ‘me’ is separated from the rest of creation, a dogma that teaches us the only way to be successful is to compete, separate, identify and classify everything in our sense bound physical reality.

When we practice mindfulness, we are alive in the present, not lost in the past or imagining the future. Through the practice of observing our own mind, our own thinking, we can reduce stress and gain insight and awareness of spiritual reality, the neglected half of self.

I think that most of you reading this article are well aware of the problems facing the human family in the coming years. There is little doubt that world war 3 is on the horizon and we will need a strong spiritual foundation to navigate the stormy seas of life as we move into 2023. Therefore I would like to draw a distinction between the attention of a conditioned mind to that of spiritual attention. One is where thought and fear are present and the other where thought and fear are not…two states that are opposites of each other.

For example, when we see a tree, the conditioned mind immediately wants to label it, identify it. …make it fit into some kind of category. What kind of tree it is. Is it an elm or an ash? Is it poisonous? The conditioned mind makes a picture of the tree, an idea of it…an abstraction along with mental associations. When asked did you pay attention to the tree? One would say. Yes. It was an elm.

But did we pay attention or only think we did?

To the conditioned mind, the idea we have of the tree is not the actual observation of the tree. The picture of the tree in our minds with all its labels estranges us from the immediate fact of the living tree. The mind moves from base to base and often runs right off the field….as a result we move our conditioned attention to other things and lose the tree.

However, when we give the tree our full attention, there is no place for mind, no association for thinking. We are enchanted by the sun’s fiery rays glittering in the leaves, and revel in the music of the wind through the branches. And, as we pay attention with our heart, we feel an infinitesimal all-encompassing Oneness…something outside of conscious thinking, something spectacularly vibrant that evades labels. In that moment we are truly alive.

If you look at the photograph you’ll see a tree but the unfettered mind sees the spirit within the form.

The Winter Solstice is a time of introspection, and as we consciously link our awareness to nature’s cycles, we will find that our spiritual understanding begins to deepen and expand. In the expansion of consciousness we become aware of a spiritual summons, a calling to transform our being and open our hearts to our higher selves. In the quiet mind we are free to unite with the One Life, the Trans-personal Consciousness of the All.  So, in the coming four days, let us pray that the spiritual worlds will split the cold rock of our materialistic thinking and allow us to be a clear channel for the ‘wind of the spirit.’

The return of wonder 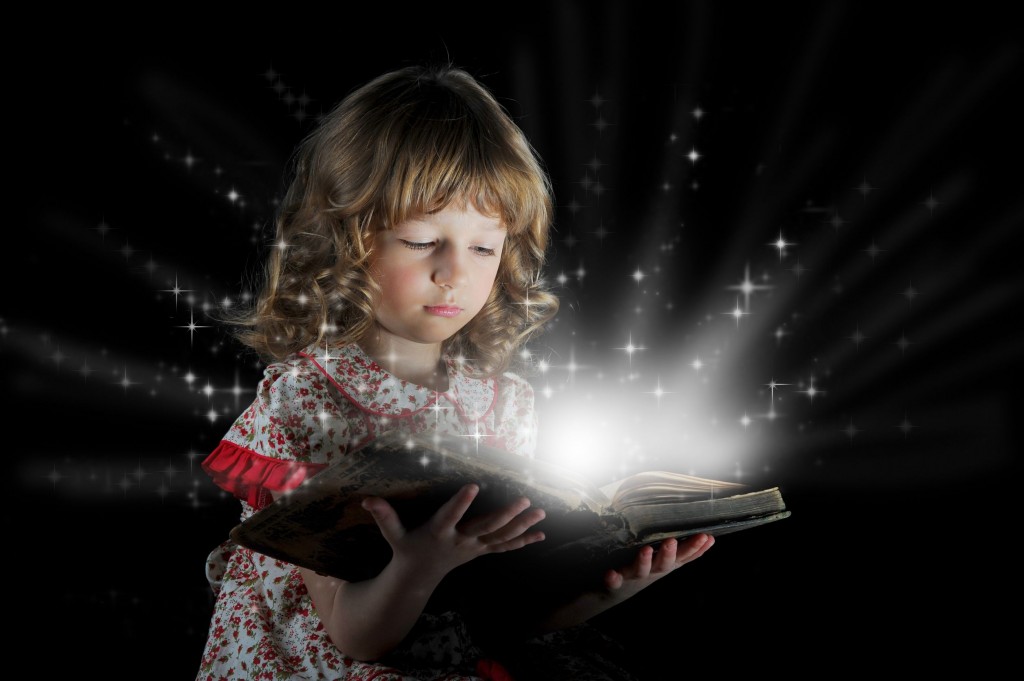 At that time the disciples came to Yahshua, saying, “Who is the greatest in the kingdom of heaven?” And calling to Him a child, He put him in the midst of them and said, “Truly, I say to you, unless you turn and become like children, you will never enter the kingdom of heaven.” (Matthew 18:1-3).

In the coming four days of the in-breath, let us be as little children…remember how it felt to be running free through woods, exploring nooks, dells and secret places under hedgerows.  Playing catch, leap frog and hide and seek, splashing in muddy puddles, and having tea parties with cats and dolls. The excitement of finding mushrooms in the grass on misty mornings and marveling at butterflies on sunny afternoons.

And the dark nights we listened with bated breath to bed time stories of elves, dragons, magic ships, talking bears, far away trees and wishing chairs … and we believed it all.

It’s time to return to wonder