Government Itself is Immoral

Hopefully by now you’ve had a chance to listen to or watch my interview with Keith Knight of Don’t Tread on Anyone about his new book, The Voluntaryist Handbook.

Even more hopefully, you’ve read or ordered your copy of that book. If not, here’s another chance: it’s available as a free pdf on Odysee or available to purchase HERE.

When you do read the book, you’ll see that Knight has chosen to publish an excerpt from my February 29, 2020, newsletter editorial, “5 Important Lessons Absolutely No One Will Learn From Iowa.” I’m glad he did include that excerpt in his book because in some ways I buried the lede—an important and informative rant about the true nature of government and the morality of anarchy—down far enough in that article that most people probably didn’t read it. Those who did likely forgot it. And the vast majority of people probably never knew it existed.

So, let’s correct that problem today. Here I re-present to you that section of the editorial on “Government Itself is Immoral.” Enjoy.

Government Itself is Immoral 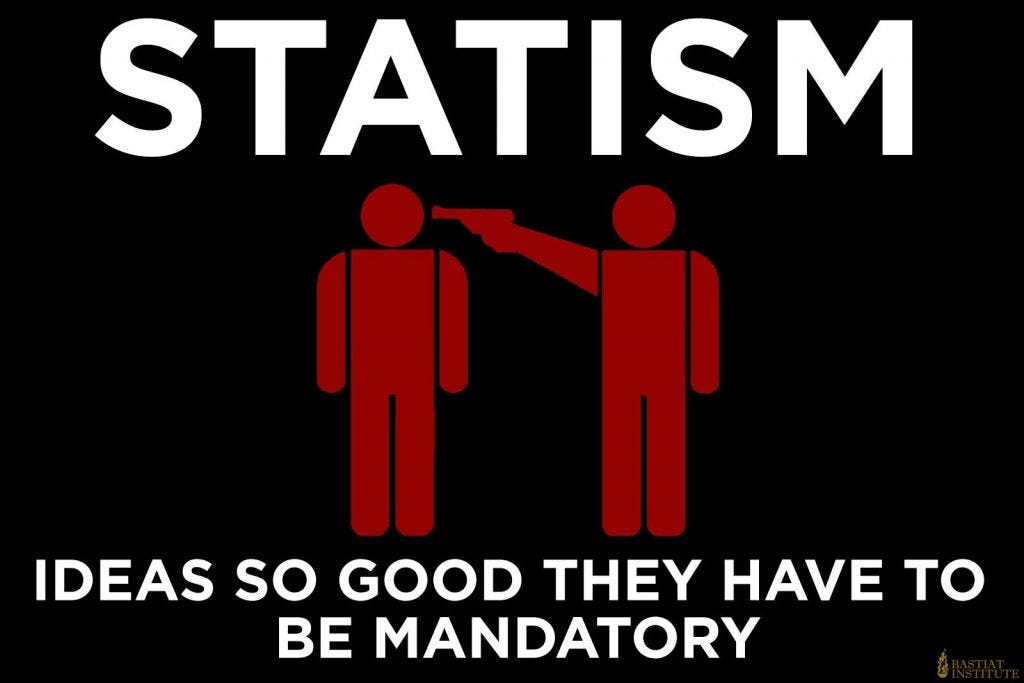 The state is not a benevolent force, despite what the most brainwashed of statists believe. It is not even a neutral tool that can be used for good or ill, as those who consider themselves pragmatists believe. It is violence. It is force. It is aggression. It is people believing that what is wrong for any individual to do is perfectly OK if an agent of the state does it.

What binds us to the state is the belief that there is a different morality for anything that has been sanctified through the political process. “Oh, 50%+1 of the population voted for forced vaccinations? Then I guess we have to comply.” If you scoff at that sentence, how about if the vote were 100%-1? Would that change the morality of resistance? How about if forced vaccinations were mandated by the constitution? Then would you be compelled to submit?

Does the ballot box transform the unethical into the ethical? Of course not. But I’ll tell you what it does do: It makes everyone who casts their ballot a part of the process that legitimizes the murder and violence committed by agents of the state.

No, I am not an efficiency manager for the state. I do not want to help it do its job of inflicting aggression and violence on peaceful people. I want the state to perish, not through violence or bloodshed, but by removing the mystical superstition from the minds of the general public that makes them believe that “government” is anything other than a gang of thugs with a fancy title.

This is the point that—in my experience as a communicator of voluntaryist ideas—I start butting up against a brick wall of incomprehension when talking to the normies in the crowd. They start having mental breakdowns, frothing at the mouth that “votes need to happen.”

As if voting, elections, positions of responsibility and other things that exist under statism could not exist under voluntary associations. As if voluntary association itself were such an arcane and bewildering concept that no one could possibly wrap their head around it (let alone, heaven forfend, read a book or two to see if some of their questions on the subject have already been answered).

No, much easier to go back to the comforting political wrestling match. “Red vs. Blue? Now that I can get behind!”

There is Only One Vote That Matters

You’d think that a column like this would be all doom and gloom.

Now I’m tempted to say, “Why ask for one solution when I’ve provided dozens?”

But, more seriously, I would say: You’re right.

No, really. You’re right. Sitting around and not voting is not going to change anything. Yes, by all means, let’s vote! . . .

. . .But (and you knew there was a “but” coming) I’m not talking about voting in some phony baloney (s)election to anoint some political puppet as President of this geographical location. I’m talking about the only vote that matters.

[. . .]For the rest of us, there is the realization that the political system itself is just another form of enslavement. An enslavement that is all the more insidious, because it asks us to buy into it. All we have to do is push a button or pull a lever or touch a screen once every four years and we are now absolved from our moral responsibility.

Ironically, this realization is in itself liberating and puts the world into focus with crystal clarity. We are not cogs in some machine called “society” to be dictated to by some nebulous entity we have been taught to call “the government” or “the authorities.” We are free individuals freely interacting with those around us, bound by the moral injunction not to initiate force against others or take things from others against their will. We are responsible for our actions and their consequences, both positive and negative. We are responsible for what we do or don’t do to help those in our community, and to make this world better or leave it to rot. There is no political messiah that will descend from the heavens to tell us what to do or to protect us from the bad men. All we have is our self and our choices.

For us, it is painful to watch our brothers and sisters getting swept up in the election-cycle hype. We watch the sad spectacle not with a sense of scorn or derision, but with sadness for those who have not yet woken up to the reality of their mental enslavement. That sadness, however, is tempered by hope: hope that one day, those poor voters who are trudging off to that booth to pull that lever will realize that all they are really doing is voting for which slavemaster they will allow to put the chains around their neck.

Beautiful. I couldn’t have said it better myself.

Too bad the people who really need to hear this message stopped reading this article when they realized it wasn’t really about the Iowa caucuses.

The Corbett Report is a reader-supported publication. To receive new posts and support my work, consider becoming a free or paid subscriber.

For the full experience, become a paid subscriber.