Matrix of Lies, Voices of Truth 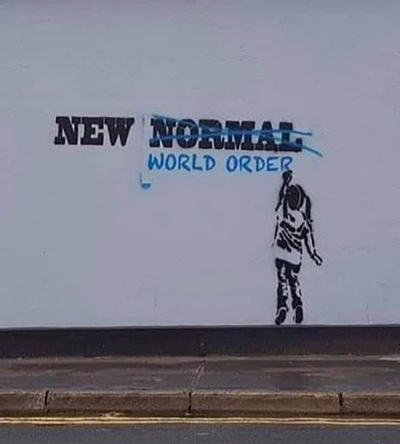 Matrix of Lies, Voices of Truth

“We’ll know our disinformation program is complete when everything the American public believes is false.” —CIA Director William Casey

“The whole aim of practical politics is to keep the populace alarmed (and hence clamorous to be led to safety) by menacing it with an endless series of hobgoblins, all of them imaginary.” —H. L. Mencken

“All of society lives from an endless deceptive practice. That practice is to perform the unnecessary and the harmful while trying to make them look like the necessary and the beneficial.” —Vernon Howard

“At an August 19thpress conference, Australia’s second most senior medical officer said the government would be discussing measures such as banning restaurants, international travel, public transport, and withholding government programs through ‘No Jab No Pay’ in order to coerce vaccine resisters. —Ellen Brown, “From lockdown to police state: The Great Reset rolls out”

“Whenever people are reminded of death, they love people who share their beliefs and they hate people who are different. They sit closer to people who share their beliefs and they sit further away from anyone who looks different. And if we give people in a laboratory setting an opportunity to physically harm someone who’s different, after people are reminded of their mortality they become much more hostile and vicious.” —Sheldon Solomon, “How unconscious fear of death may skew your judgment”

“When you uncover someone’s existential fear you reveal their inner tyrant.” –Tom Luongo

“Friends from normal circumstances are largely useless as comrades when malign forces have made them scared.” —John Ward, “The sum of cultural, free speech, health & economic damage done by the Covid19 caper”

“The story is that societies cannot survive the pandemic without society-wide lockdowns until we have a vaccine, despite the fact that we have never had a vaccine for a coronavirus, vaccines usually take many years to develop, and many of them are not all that effective once made. Penetrating this narrative has been incredibly difficult even for impeccably credentialed scientists. One might even say that this pandemic killed scientific debate.” —Stacey Rudin, “The pandemic that killed debate”

“The World Health Organisation was established solely to market Western medical products worldwide and at the most profitable rates possible.

…
“The WHO… declared a global pandemic under the most spurious conditions with the full knowledge that this would not only permit a shutdown of the economy (for political and economic benefits I have detailed elsewhere) but to create something only logical—the Pharmadollar….

“An emerging and potentially infinite demand for pharmaceuticals– legal or illegal– safe or unsafe—will offer the Western pharmaceutical cartels untold and unlimited profits and because these are all countries working in the USD / EUR markets, together with the WHO [they] will be guaranteed potentially unlimited profit streams. So from the first circle of hell we descend into the second circle. Can we get any closer to damnation?”

—Dr. T. P. Wilkinson, “Inferno and the ‘Fourth Circle’: The American empire and the 2020 pandemic”

Notes for a Panarchist Manifesto

“As I think of the many myths, there is one that is very harmful, and that is the myth of countries… All of those myths that we impose on ourselves—and they make for hatred, for war, for enmity—are very harmful. Well, I suppose in the long run, governments and countries will die out and we’ll be just, well, cosmopolitans.” —Jorge Luis Borges

“The task ahead is to demonstrate that whatever the sacrifices required to achieve more localized decision-making might be, centralization is too dangerous to continue.” –Porter Burkett, “Too much centralization Is turning everything into a political crisis”

“Distrust the government, avoid mass media, and fight the lies. Please remember that although you may sometimes feel that you’re alone, you’re not. More and more people are waking up, and we will win this war.” —Vernon Coleman

To Stay Alive, or To Stay Human?

“As Thomas Crew details in his article The Dystopian Age of the Mask, the ‘eradication of all individuality’ is a running theme of all dystopian literature.… Crew explains how the public has been brainwashed to believe that the continuation of life, no matter how stifled, atomized and undignified it may be, is the only consideration.”

Crew: “The modern age has a habit of reducing the human being to a functional object. Everything ‘non-essential’ – everything, that is, that makes us human – is blithely discarded.… Whether the call for social isolation, perpetual ‘vigilance,’ or mandatory face masks, the measures of the last six months represent more than an assault on liberty. They implicitly enjoin us to sacrifice our humanity in order to save our lives. Even if this Rubicon has not yet been crossed, it is worth thinking about the point at which it is. For perhaps there is more to life than its mere continuation. Perhaps ‘the object,’ as Winston Smith [in Orwell’s novel 1984] well knew, ‘is not to stay alive but to stay human.’” —Paul Joseph Watson

“What’s coming up in a mere generation or so is one of three possibilities: total freedom, total slavery, or total annihilation. Sorry centrists, there is no incremental option. The confluence of AI, automation, and an increasingly paranoid and controlling elite class means that we are likely to be subjected to more surveillance, more manipulation, more work for less pay as jobs disappear along with safety nets, if we don’t destroy ourselves altogether. Or, we change our consciousness so rapidly that we do away completely with the lack-driven punitive system that demands people work for a living, and embrace the abundance that is right here already. We will work of our own free will, and at our own pace doing the things we want to do. If that’s hard to imagine, I implore you to try to imagine it and see how it could be possible. It’s not that hard. We have all the tools we need already.

“Humans are such explosively beautiful wizard giants. It would be a goddamn shame if we wiped ourselves out before truly seeing that.” —Caitlin Johnstone, “Assorted thoughts on politics, humanity, and the world”

Nowick Gray writes from Salt Spring Island, BC. His books of genre-bending fiction and creative nonfiction explore the borders of nature and civilization, imagination and reality, choice and manifestation. Connect at NowickGray.com to read more. A regular contributor to The New Agora, Nowick also offers perspectives and resources on alternative culture and African drumming, and helps other writers as a freelance copyeditor at HyperEdits.com. Sign up for the “Wild Writings” email newsletter for updates and free offers