Monkeyshines And the Tilting of the Wheel 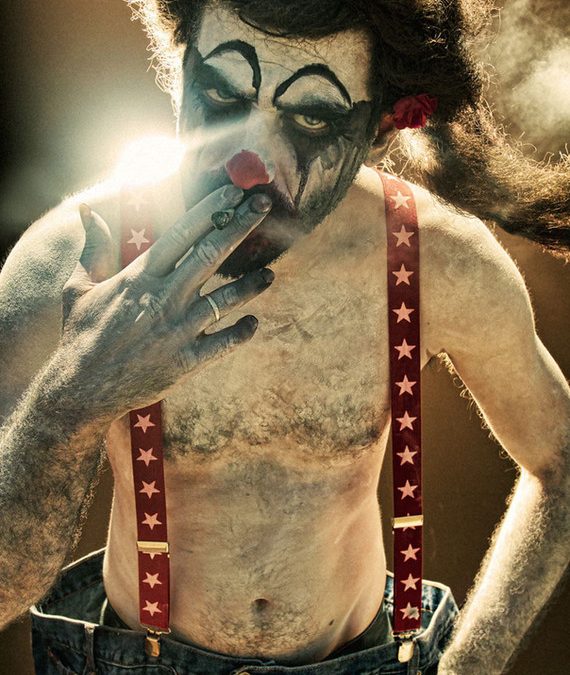 Monkeyshines And the Tilting of the Wheel

“I want to stay as close to the edge as I can without going over. Out on the edge you see all kinds of things you can’t see from the center.” ~Kurt Vonnegut

This is the kind of energy we’ll need to turn along with the great wheel of change without getting crushed. The future is rolling in with a speed that defies reason and threatens to flatten us into obsolete cogs in an outdated clock.

As Yuval Noah Harari advised, “in the twenty-first century, you can’t afford stability. If you try to hold on to some stable identity, job, or worldview, you risk being left behind as the world flies by you with a whoosh.”

Monkeyshines is a proactive tactic laced with just the right blend of curiosity, courage, and humor to help keep us ahead of the curve (or “whoosh”). It’s a tapping of our inner child and inner trickster.

Our inner child keeps us humble in Beginner’s Mind, where we are always in a state of awe and wonder, legs dangling over the edge of the universe, open and innocent in our curious vulnerability.

Our inner trickster keeps us flexible and humorous with an edge of frivolity and zeal despite the seriousness of the too-moral goodie-two-shoes or the too-immoral sociopaths that keep the culture stagnant and sick.

These two archetypes combine into a force of playful nature which makes up the game changing, table turning, script flipping, monkeyshines.

We can’t afford stability in the new world that’s coming. Stability equals a stagnant and stuck wheel that will sooner or later break apart under too much stress. What’s needed is a flexible and playful balancing mechanism. Flexibility equals a tilted wheel that still runs smoothly through the everchanging landscape, but which is “tilted” in our favor through resilience and adaptability. That’s the power of monkeyshines.

If we try to “hold on to some stable identity, job, or worldview” we risk being left behind. Monkeyshines can help us square the circle of what it will mean to be flexible regarding our identity, jobs, and worldviews. Let’s break it down…

The primary story is the story we tell ourselves, and each other, about our culture, religion, and tribe (or nation). The secondary story, strutting its way across the stage of the first, is the story of our identity.

The power of monkeyshines against identity is that it shines a revealing darkness—a kind of blacklight—into the blinding light of the two stories. It unveils the stagnant self. It pulls back the curtain, revealing that the wizard was always you.

So, now that you know that you are the one who has been deceiving yourself all this time, you might as well have fun being the wizard. Play with the stories you tell yourself. Make up new stories even while you are hopscotching over outdated ones. Smash this story into that story and create a Meta-story that transcends both. Have fun. Stay curious. Laugh at yourself for having been deceived by the old story, and then deceive yourself all over again with a new one.

The self is masks all the way down perceiving delusions all the way up? So be it. Rock and roll! The key is not clinging to any single mask or story. Just be aware. Never settle. Keep going. Keep rolling. The tilted wheel of monkeyshines slows down for no one. But with enough self-overcoming, it will keep you ahead of the curve.

“Why does everything have to be so hard? Because everyone wants to eat, but no one wants to be eaten.” ~Christopher Paolini

Careers are a twentieth-century invention that have no place in the twenty-first century. If anything, they are a handicap. Between automation and algorithms, the poor little human clinging to an outdated institution is crushed.

Artificial intelligence is more intelligent than we are conscious. Algorithms like Google, Facebook, and Amazon know us better than we know ourselves. This is simply the beginning of the end of the career. The future will demand that we change how, why, and where we work. Or we’ll be left behind by those who can.

Monkeyshines emboldens us to toss a monkey wrench into the machinery. It forces us to get creative, to be imaginative, to adapt and overcome. More importantly, it gets us out of our own way. It reveals the work we loveto do despite the work we falsely believe we must do. It puts life into perspective.

Money should be a side effect of doing what we love, not the other way around. Life is too short to remain a cog in a dysfunctional clockwork. The speed of change is too fast to become stuck in a dead-end job.

Overcoming the speed of change may mean shooting yourself in the foot from time to time. But then you adapt and reorient. Stay sharp. Stay flexible. Unlearn what you’ve learned and then use your imagination to jumpstart the engines.

Beginner’s Mind is there, lying latent inside you. Tap it. Roll with it. After you’ve tricked the system with your inner trickster and blitzkrieged the workforce with your monkeyshines, rise above it all with a sense of humor so sharp it cuts through outdated notions of responsibility.

Worldviews Are Not So Worldly:

“As long as you live, keep learning how to live.” ~Seneca

Unquenchable curiosity is the sharpened blade of monkeyshines that cuts through all things. Especially that which people take too seriously. Curiosity is the tip of the spear, the scythe in the question mark, the magic elixir that cures the disease of certainty. It is the most powerful aspect of both our inner child and our inner trickster. And it is the seed of compassion, tolerance, and empathy.

Curiosity is the fuel that keeps the engines of our monkeyshines running smoothly, flexibly, fiercely. It keeps the wheel tilted just right. With chaos on one side of the tilt and outdated tradition on the other side, curiosity keeps us even-keeled and plowing through uncertain waters.

Just as with the fiction of identity, we are the creators of the fiction of our worldview. We are the storyteller who believed our own story—hook, line, and sinker. The key is being aware of the hook and the line, and, rather than sink, use them to rise up. Use them to hook yourself to infinity and soar.

Worldviews are delusions. And that’s okay. No reason to take them so seriously anymore. Monkeyshines teaches this. Better to play with them. Laugh at them. Mock them even. Use one worldview to knock another worldview off kilter. Use Counter-weltanschauung Dynamics to upset the misbalance.

If, as Krishnamurti said, “it’s no measure of health to be well adjusted to a profoundly sick society” then it stands to reason that we become unadjusted. It’s time to readjust to a healthier way of being human in the world.

The only way we do that is by shining the black light of our monkeyshines onto the murder scene of the ecocide. We do it by changing worldviews. But worldviews won’t change themselves. There’s got to be a wakeup call. There’s got to be some kind of shock value, shock treatment, or shock art. That’s where monkeyshines comes in to un-fuck the fucked up situation through enlightened shenanigans and the heightened hijinks of higher awareness.

This article (Monkeyshines And the Tilting of the Wheel) was originally created and published by Self-inflicted Philosophy and is printed here under a Creative Commons license with attribution to Gary Z McGee and self-inflictedphilosophy.com. It may be re-posted freely with proper attribution, author bio, and this statement of copyright.