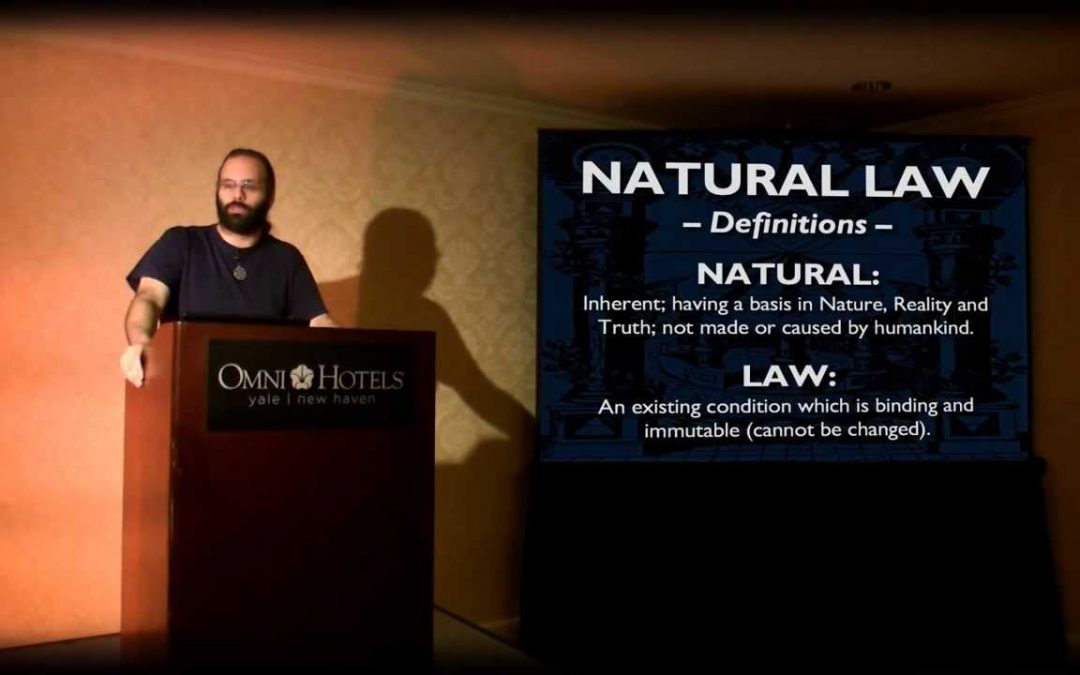 If I could recommend only one Youtube video for truth-seekers who want clarity about the human condition, it would undoubtedly be Mark Passio’s Natural Law Seminar. It is a passionate, harsh and highly enlightening seminar in which reformed Satanist Mark Passio does an excellent job explaining and demystifying the fundamental grounds for the rights of all sentient beings in the universe: Natural Law. I don’t necessarily agree with all the minutiae of what he says, and you may not either. You may even be put off by his harsh, direct presentation style. However, I believe that his overall perspective and lucid articulation does the best job I’ve ever seen of encapsulating this very complex subject.

I will be writing a series of articles on Natural Law because I believe it is important for us as truth-seekers to know our natural and inalienable rights as human beings. We need to understand the reasons we don’t exercise these rights, and why we have unknowingly given our freedom away to powers that would pose as our ‘legitimate’ authority. Subsequent articles on the ‘Sovereign Citizens Movement’, ‘Challenging the Corporatocracy’ and others will be grounded on the base understanding established here.

The question of how we escape from the enslavement and create a new order based on our personal sovereignty is predicated first on actually distinguishing truth from fiction, and gaining clarity about our inbred rights and obligations as sentient beings in this universe. I will do my best to summarize some of the key concepts about Natural Law in the article here, but again I would urge you to take the time to enjoy the entire presentation given in the video below in order to gain the most fulsome understanding possible.

As a context, Passio gives us something to think about by saying the ‘nature’ of being human is that we are programmable. He takes great pains to explain that he doesn’t think that we are computers, but rather are like computers insofar as the tremendous impact of our outer environment on our behavior, including our early childhood (‘file formatting’), culture (‘operating system’) and inherited beliefs (‘software’).

Human nature is neither inherently good,  nor inherently evil. Instead, we should consider the environment in which human beings exist, which influences behavior to a great extent, thus creating the current human condition.

It is the state of our minds, founded on our knowledge and our belief systems, that leads to how we behave in the world and results in the world being in the condition it’s in. And Passio does not mince words in describing the degenerate and underwhelming state of the world today. As a former Satanist, he sees very clearly how the world is racked in fear and suffering, sponsored by extreme, out-of-balance thought patterns.

He says that if we truly want to create a better world for ourselves, we first need to be willing to learn ‘how to learn,’ and then how to recognize and embrace truth by rejecting all the false programming we have been fed. He believes our knowledge, understanding, and execution (‘wisdom’) of Natural Law is central to this.

Mark Passio’s working definition of Natural Law is ‘Universal, non-man-made conditions that govern the consequences of behavior; a body of natural spiritual laws that act as the governing dynamics of consciousness.’ Because Natural Law governs consciousness within the physical universe, it is beyond the realm of the powers of our beliefs, intentions, and personal consciousness. Natural Law is eternal, unchangeable, and independent of our beliefs, hopes, or preferences. Reminiscent of Jean-Paul Sartre’s notion that ‘we are free to do anything except deny our freedom,’ Passio is hinting that ‘Natural Law allows us the freedom to create anything in this universe except for a universe in which we cannot create.’

Passio makes the point that human beings all have free will, at all times and in all places. This implies that we are always responsible for our actions, since we have the freedom to choose and behave in the way of our choosing. That which governs human behavior and its consequences in our universe actually exists within the synergy of two things: a ‘deterministic’ component (the immutable principles of Natural Law) and a ‘random’ component (Human free will).

Passio states that there are 8 principles that ‘constitute a Master Key through which Universal Wisdom (including the Knowledge and the Requirements to obtaining what we desire) is unveiled.’ The first 7 of these principles are famously known as the ‘Hermetic Principles,’ while the 8th is what Passio terms the ‘lost Principle’ which actually binds the other 7 principles together to really give us access to the wisdom to create the kind of world we truly want. These principles can be somewhat complex and are worth the time and effort you make to study and understand them.

Each one of these principles is worthy of an article in itself and a lengthy discussion, but I will leave you to check out the video at about the 3-hour mark for the way Passio explains each of these principles in greater depth. Together, these principles help us understand our capacity to create our world exactly how we want: by making changes in the mental plane (the plane of cause) we can then change the physical plane (the plane of effect) and thus change the state of our world. In order to do this, however, we need to understand the 8th principle and how it binds the other seven together.

For Passio, the 8th principle is called the lost or hidden principle because it is not widely known or available in the literature, compared to the 7 Hermetic principles. But it is absolutely essential, because it encapsulates the other seven principles in the way that a seed casing encapsulates the wondrous creative power of the seed. The picture below on the left is called the ‘seed of life’, with its 7 intertwined circles representing the 7 hermetic principles. The picture on the right, which actually resembles a pendant that Passio wears on the chain around his neck in the presentation (Passio’s also has the inner circle seen in the previous picture), shows an outer circle that holds the other principles intact, and represents the 8th principle.

Passio explains that the 8th principle is Care. By care he means what we focus on or put our attention on, what we value as important, what we give our energy to, what we care about. This underlies the biggest secret in the capacity of human beings to manifest through intention, which is one reason that Passio’s presentation is subtitled ‘The Real Law of Attraction.’ It is through care, which has components of thought, emotion, and will, that the creative power of the human mind is unleashed to generate the manifested world consciously rather than unconsciously as we have done throughout our history up to now.

Awakening To Our Tremendous Power

The notion that we, as human individuals, are collectively responsible for the manifestation of the current human condition may be hard to believe and even harder to acknowledge for some of us. But Passio tells us from his own experience that this occult (hidden) knowledge is used by Satanists and other powerful secret groups to ensure that we continue to create the type of world that suits them and their agenda. Passio talks about the tremendous amount of work he had to do looking inside himself and challenging his own beliefs and values in order to reach a fuller understanding of what is really going on in our world. His aim now is to be a ‘de-occultist’, to take this hidden knowledge and present it in a way that it can be understood and proliferated. No matter what you think of his gruff style of presenting, it becomes clear after a while that Passio really does care about the state of the world and has a deep sense of moral responsibility to help make it better.

In part 2, we will look more closely at his discussion of Natural Law and how we can begin to apply its principles.

I’m Richard Enos, a writer and transformational life coach. My mission here is to help awaken people, both to the truth about the outer world and the truth about our inner potential to change it.

If we are to create a better world together, we all need to combine outer action–standing up for our inherent sovereignty as individual human beings–with inner reflection, dedicated to improving our integrity of mind, body and spirit.

For me, creating a better world means actively moving away from advertising as a funding model.  I will rely solely on intentional offerings, and so if you would like to support my ability to do this work, any contribution is greatly appreciated.

My book ‘Parables for the New Conversation’ is an exploration of what is possible when human society is grounded in a conversation that embodies truth, acceptance, and the unlimited potential of the human spirit. Read more…