Pharma’s Criminal Business Model — and How the U.S. Government Benefits From It 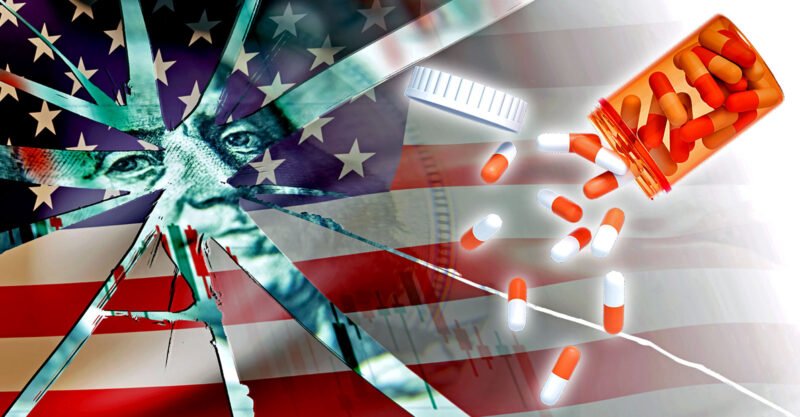 Pharma’s Criminal Business Model — and How the U.S. Government Benefits From It

An analysis of 27 years of “ongoing, systematic wrongdoing” by the pharmaceutical industry reveals the U.S. Department of Justice has levied billions of dollars worth of fines against pharma companies, often under the False Claims Act. The fines support government budgets but do nothing to reform the industry’s criminal behavior.

In early September, the U.S. Department of Justice (DOJ) announced that pharma giant Bayer would have to fork over millions to the DOJ to resolve allegations of fraud under the False Claims Act (FCA).

The False Claims Act, which enables civil cases involving fraud and false claims against the government, dates back to the 19th century and Civil-War-era defense contractor fraud — but in modern times, healthcare fraud is the “top driver of FCA activity, both in the number of cases filed and total dollars recovered.”

In fiscal year 2021 — a year in which medicine and pharma went to town with demonstrably murderous COVID-19 hospital protocols and vaccines — the act brought in $5.6-plus billion, the second largest annual total in the FCA’s history.

And, though the total amounts were smaller in the three preceding years — fiscal years 2020, 2019 and 2018 — healthcare-related cases still predominated, accounting for 86% to 87% of settlements and judgments.

In 2016, and again in 2019, the consumer advocacy organization Public Citizen zeroed in on “ongoing, systematic wrongdoing” by the pharmaceutical industry, analyzing up to 27 years (1991-2017) of criminal and civil penalties paid to the federal or state governments, whether via the FCA or other mechanisms.

The top two types of violations were drug-pricing fraud and unlawful or deceptive marketing. But the reports also described practices such as kickbacks, patent manipulation, corporate collusion, data concealment, sale of contaminated or adulterated products, accounting and tax fraud, insider trading and distribution of unapproved drugs.

In 2020, academic authors published a similar analysis in the Journal of the American Medical Association, reporting that 22 of 26 Global 500 or Fortune 1000 pharmaceutical firms had paid state or federal penalties for illegal activities between 2003-2016, with all but one firm engaging in the illegalities “for 4 or more years.”

The authors speculated that the four companies not documented as paying penalties could be more ethical or, conversely, might harbor “an ability for illegal activity to be undetected.”

All of these reports support the conclusion of Marc Rodwin — a Suffolk University Law School professor and expert on health law, policy and ethics — who wrote in a 2015 legal paper that the pharmaceutical industry’s “wide-scale” misconduct “risks slipping into the banalities of ordinary business practices.”

Bayer’s drop in the bucket

Bayer’s just-announced $40-million DOJ settlement, which responds to whistleblower lawsuits initiated nearly two decades ago, represents a drop in the bucket compared to the company’s $48.9-billion earnings for 2021.

The Germany-headquartered company, the world’s sixth-largestpharmaceutical juggernaut, is engaged in an ongoing biotech “investment spree” that has enabled positive financial results despite the current legal headaches associated with its ownership of Monsanto.

Violation Tracker, a database covering corporate misconduct from the year 2000 on, displays 155 results for Bayer and its subsidiaries over the past two decades, listing penalties such as drug and medical equipment safety violations, FCA offenses and various other forms of fraud.

The company’s “history of malfeasance” extends much further back, however, featuring its marketing of heroin as a top-selling children’s cough syrup in the early 20th century; the sale of lethal chemical weapons during WWI in violation of chemical warfare treaties; collaboration, as part of the IG Farben conglomerate, with Nazi medical experiments during WWII; knowingly marketing tainted blood products in the 1970s and 1980s; and, for 16 years, promoting a now-recalled birth control device — the focus of nearly 20,000 lawsuits — that routinely perforated women’s internal organs.

The long-running lawsuits that led to the latest settlement alleged Bayer paid kickbacks to hospitals and physicians to promote three drugs: a cholesterol drug recalled in 2001 after being linked to “significantly more fatal cases than its competitors,” a potent antibiotic associated with a wide range of serious or fatal adverse reactions and a kidney-toxic heart surgery drug approved in 1993 and belatedly recalled in 2007, after killing an estimated 22,000bypass patients.

The whistleblower also alleged drug marketing “for off-label uses that were not reasonable and necessary” and significant downplaying of the two recalled drugs’ safety risks.

Though Bayer withdrew both drugs for “safety reasons,” its settlement admits no wrongdoing.

Top offenders since the early 1990s

In 1986, Congress amended the False Claims Act, significantly expanding its scope and “breath[ing] new life into what has now become the government’s primary enforcement tool against fraud.”

However, that same year President Ronald Reagan signed into law the National Childhood Vaccine Injury Act, a piece of legislation that decimated incentives to make vaccines safe by furnishing manufacturers with blanket immunity from liability for vaccine injuries.

The lifting of those legal constraints catapulted vaccines from a “neglected corner of the drugs business” into a major driver of pharmaceutical industry profits.

Public Citizen’s 1991-and-on analyses of settlements indicate these manufacturers also felt emboldened to engage in lawless — and recidivist — behavior even for drugs not enjoying liability protections.

According to Violation Tracker, Johnson & Johnson (J&J), Merck and Pfizer are the top three companies in terms of total penalties paid, with the latter two also accounting for the largest numbers of violations.

Among Pfizer’s penalties was a 2009 settlement for $2.3 billion — the largest healthcare fraud settlement in the DOJ’s history.

Merck and Pfizer happen to be two of the “big four” companies providing the vaccines on America’s childhood vaccine schedule, and J&J and Pfizer are responsible for two of the four COVID-19shots authorized for U.S. use.

In 2021, Pfizer became the world’s largest pharmaceutical company, by revenue, thanks to its COVID-19 shots, also liability-free, and its Paxlovid drug. Together, Paxlovid and the vaccines accounted for almost half of operational revenues.

“Durable Covid-19 revenues” are fueling Pfizer’s expectation that it will remain a “growth company.”

Although pharmaceutical industry kickbacks to hospitals and physicians are among the bad behaviors openly acknowledged to lead to settlements or judgments, few experts discuss, even indirectly, the fact that the penalties themselves function as a form of federal kickback.

Law professor Rodwin discreetly alluded to this in his 2015 paper when speculating as to “why prosecutors rarely use the strongest sanctions in their arsenal.” Rodwin hypothesized that it might be because they “prefer to seek monetary penalties to support their budgets.”

According to Violation Tracker, pharmaceutical penalties since 2000 have enriched federal (and state) coffers to the tune of over $87 billion.

Curiously, Public Citizen’s two reports showed a sudden drop in 2013 and 2014 in the number and size of settlements, with federal criminal penalties “nearly disappearing” by 2017.

An honest look at history shows, however, that far more often than not, the DOJ — and regulatory agencies like the U.S. Food and Drug Administration and Centers for Disease Control and Prevention — have been pharma’s biased partners in crime rather than its antagonists.

Examples of the phony and selective zeal for justice include the alleged fraud perpetrated by DOJ lawyers intent on denying compensation to thousands of National Vaccine Injury Compensation Program petitioners, and, more recently, Pfizer’s astonishing argument that a COVID-19-vaccine-related whistleblower lawsuit against it should be dismissed “because the U.S. government knew about the wrongdoings but continued to do business with the vaccine maker.”

And from the pharmaceutical industry’s perspective, handing over an $87-billion cut to the feds to grease the skids appears to be an acceptable price to pay.

As Public Citizen noted a few years ago, pharma penalties over the 1991-2017 period represented a paltry 5% of the 11 largest global drug companies’ net profits “during just 10 of those 27 years,” amounting to little more than a slap on the wrist.

Emphasizing the “stark imbalance” between penalties and profits, the consumer group concluded that without more sincere and active enforcement — including prosecution and jail sentences for executives overseeing systemic fraud — “illegal but profitable activities will continue to be part of [pharmaceutical] companies’ business model.”