PUB: The Law is the Law 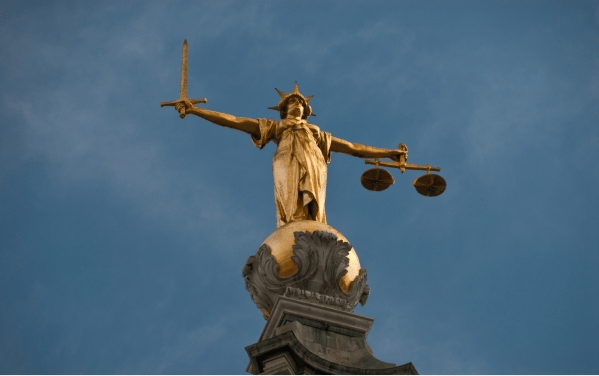 and We are Taking It Back.

If justice is a lady, then it is time for us to take off her blindfold, relieve her of her mask, give her a hug and tell her to crack on with imposing our common law. If we love her and what she represents, then the usurpers, traitors and cowards who undermine our will are destined to drown in the blather of their own legalese and statutory horseshit.

On 21/12/21, PUB, The People’s Union of Britain, filed criminal charges against 8 individuals charged with using Midazolam to murder tens of thousands of elderly victims, by way of government policy.

When I spoke at the statue of Robin Hood in Nottingham on the evening of that Winter Solstice, 2021 (below), I emphasised that, whatever the Robin Hood narrative may be, it is stands as a powerful archetype of a spiritual dimension as much as anything else. Thus, it was the perfect location for a venting of individual and collective spleen.

Whilst the mainstream will paint the archetype of Robin Hood as an out-law who stole from the rich to give to the poor, this is but an Ahrimanic inversion of the Truth.

The archetype of Robin Hood continues to stand as a re-affirmation of the law of the land and, in accordance with which, the narrative was about taking back (reclaiming) the wealth that had been stolen from the people by the over-lords of the realm. A situation with inevitable parallels to the one we currently find ourselves in.

There exists a number of gobshites who claim that PUB’s Private Criminal Prosecutions of those accused of using Midazolam to mass murder the elderly is doomed to failure because the legal system is a rigged one.

The rigged system is at its most treacherous in the civil justice system and this is something that I have written about in great detail and is a key element in the Great British Mortgage Swindle which is dependent upon the captured courts rubber stamping any and all fraudulent possession claims in the County Courts.

Prior to WW2, when it was suspended and never re-installed, any and all possession claims were heard by a jury of 12, sitting under the common law at the County Court. Not a solitary judge with a conflict of interests who acts as a bankster’s moll.

Had I presented my defence against the Bradford and Bingley’s false claim over my house to a jury of 12 men and women, I am confident the outcome would have been in my favour. After all, the bank did not loan me any of its own funds (thus, no consideration on its part) and, of course, there was no lawful contractsigned by both parties or a valid deed of mortgage. That was the (correct) argument from the very beginning and it remains enough to knock out any fraudulent claim against one’s property. At least it would in a lawful justice system. As the system stands, its judges and the lying lawyers of the banks ignore the evidence and insist on rubber-stamping the fraud that exists in plain sight in all UK mortgages.

In that regard, the old system remains a valid one that has been laid over with a foul veil of ‘legal’ deception.

In the Criminal Justice System there is very little opportunity for a judge to overrule on the facts of the matter which is evidence based. Evidence that includes personal witness testimony to the facts. The main threat to justice in the criminal system is the deliberate obfuscations by the Crown Prosecution Service and Police when an attempt is made to bring to trial any and all members of the ruling elite for their crimes.

Thus, it is not the system that is the problem for its foundations, being based in reason and common law that is millennia old, are solid.  No, it is the capturedpractitioners at work within it who are the problem for they come between the people and justice.

This is why I am firmly of the view that the people need to take back our stolen justice system by insisting, at every turn, on the application of the evidence, reason and the common law to every matter. Viz, due process of the law.

The PCP and the other common law actions being taken are emblematic of this. By demanding due process of the law, we reaffirm our judicial system under natural law, God’s law and common sense, whatever you choose to call it.

Thus, it will naturally follow that the bedrock is uncovered,

No one is above the law

In so doing, we reclaim our individual and collective sovereignty. This can be achieved by refusing to consent to any and all statutory legal bullshit and ‘governance’ and removing yourself from the state-corporate jurisdiction and stepping into the natural law jurisdiction of Universal Community Trust (UCT). How do I do that? one may well ask. For more information on this, please visit the UCT site and the Frequently Asked Questions (FAQ) section.