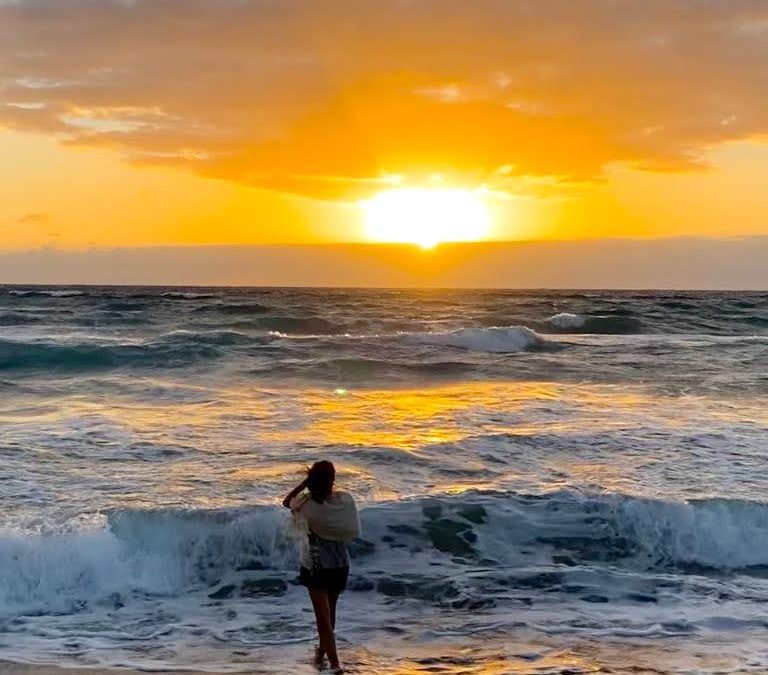 If you’ve been part of a community that revolved around rituals, moral codes and devotion to an externalized god like figure, you may find parts of my story familiar.  If you’ve also reached a point on your path where you’ve realized that this way of life has needed to shift to find more connection to the guidance inside, you will know how painful that transition is.  I have condensed my 25-year journey of this process into a short article that leaves room for details no doubt.  But I hope it helps you in some way.  I am a very different person today from the years of having had the shelter of a guru and spiritual community.  Through this process, I know that I can no longer depend on anyone to guide me further on my journey.  I need to primarily rely on that higher intuitive voice within.  For some of us, an external god like figure and a community are essential for support, and we feel a sense of home and comradery to treasure throughout our life.  But if you are like me, it will be something we have to release in order to gain a greater level of sovereignty and freedom.

I found my guru over 25 years ago when I was in my early 30s.  I had been living in Budapest, Hungary teaching English in a high school.  I found out about a yoga class being held near the school and went one evening.  Not long after, I was at a weekend yoga retreat outside the city.  Sanskrit mantras were being given out one evening, and I was more than ready to get one.  At my initiation ceremony with about 40 others, it was a very intimate gathering led by a mysterious, majestic big Indian man in orange robes.  They called him Swamiji.  When it was my turn to approach Swamiji and kneel in front of him, my heart was racing.  He used his thumb to touch between my eyebrows and slide it up to the top chakra of my head.  Then I heard these words inside me, “There you are!  I’ve been looking for you!”  Swamiji’s eyes shot open from his contemplation and we could see instant recognition in each other’s eyes.   I was given a piece of paper from various piles he had with short Sanskrit mantras written.  “A human without a mantra is like a body without a soul,” Swamiji told us.  “It will help you focus your mind during meditation, so practice it daily.”  Everyone continued going through the same process to get their mantra, but I didn’t see Swamiji’s eyes shoot open in recognition with others like he had done with me.  Then we all sat in silence to enjoy the divine atmosphere.  What a relief.  I didn’t need to keep looking for my ticket to freedom, healing and enlightenment anymore.  I finally had it!

For several more months I was diving into the various yoga practices to become stronger physically and mentally.  I attended yoga seminars in neighboring countries, sat for hours listening to lectures on yoga scriptures, and learned to do the postures, breathing techniques and meditation practices well.  I remember feeling chills when Swamiji would talk about God.  “Yoga means union with the divine within,” he would say.  I knew, these were the teachings I had been looking for!  Then as my time in Hungary was coming to an end, Swamiji suggested I go to Northern Virginia to join a small group of disciples who were intent on starting a yoga center there.  Now I had a mission!

The next several years involved getting to know the small group of people in Virginia, having regular meditation practices together in a small house we rented, traveling to India, and singing spiritual songs in a local Indian dialect written by a great Indian master of our lineage.  Surprisingly, I felt an ease at learning this language with music and would play on the Indian harmonium or keep beat through a drum.  We eventually found a suitable public space to teach our different levels of yoga, and our classes quickly became packed.

Within just a few years, the center had become so popular that we could actually purchase a bigger space.  We were thriving and enjoying the work we could do for the community.  Occasionally, we would hear of well-known disciples in other countries leaving their yoga community.  We would have deep discussions on the possible reasons why so that we wouldn’t get stuck in the same situation.  The conclusions were often associated with the person not being able to stand through the tests of doing the service work voluntarily and/or not having enough devotion to get through the spiritual hurdles on the path.  It all made sense at the time.  But it wasn’t too much longer after our expansion that our local Swami also reached his limit and wanted out.  Our small dedicated group of about 10 people was devastated.  He had grown tired of the responsibility, the community ups and downs and the celibacy.  His departure left us scampering to find a way to maintain the lifestyle we’d grown to love and depend on.

Because we had become so successful and all of us had families and jobs to prioritize, Swamiji decided to send someone from another international yoga center to take over.  What a relief!  We could then continue on once adjusting to some transitional period.  The man that was sent was a newly initiated swami who was motivated by success.  He saw yoga and spirituality as commodities for sale, rather than a way of life such as we thought we had been living.  It was an unexpected slap in the face and again left us devastated.  He saw us as old school and simply needed to make room for others to lead classes and spiritual gatherings for the sake of saving their soul.  The whole process was so painful.  We definitely didn’t just roll over and acquiesce, but eventually my husband and I moved a couple hours away to continue raising our children away from the internal and external dramas of the change.  For 10 years, we diligently did our yoga practices, still traveled for yoga seminars in other countries, and occasionally visited the center in Northern Virginia, especially when our main guru, Swamiji, would visit on his annual world tours.  We had found a way of making peace with the process of letting go of the center and our yoga image, while also holding onto our ticket to enlightenment.

After our kids had become independent and I was in my early 50s, I still felt a need to find yet another way to salvage what was left of my yoga path.  We had the option of returning back to Northern Virginia to help support the yoga center, which had actually lost this motivated Swami some years ago.  He too had suffered through some disillusionments.  So, we opted to go back.  Hope was rekindled for a while, but not for long.  Within a year, the volunteer work of teaching classes and managing the organization had lost its spark.  The center was nowhere near the thriving place it used to be and other yoga businesses in the neighborhood seemed to be flourishing.   We had to focus on marketing, discount coupons and how to draw more people into our even smaller group of dedicated disciples.

This, along with college teaching and my marriage, seemed to take so much effort.  When an opportunity can along to teach English in The Czech Republic, I jumped at it.  I moved there on my own and ended up being there for a couple years.  I saw it as a great way to reevaluate my life.  I also spent time traveling and occasionally being involved with the yoga communities in Europe.  I again wished for the love of my path to return, but there were too many disappointments ensuing.  Swamiji’s age had made his lectures less cohesive or inspiring, and his message changed from find your guru within to, “Follow, follow, follow what guru says.”   I saw other disciples unable to make decisions about even some of the smallest things without a consultation from Swamiji.   Then when Covid came and people were expected to wear masks to gatherings, that was the final thing to push me away.  There had been so many lectures on the importance of the breath, yet we were now expected to cut down our oxygen supply for others?  That was it for me!

I remember the last time I sat with Swamiji alone in his house.  I had wanted to avoid seeing him so as not to get a lecture on the importance of family and me getting back together with my soon to be X husband.  However, there was a beautiful timing to when I saw him. I was in a space of presence, love and total openness to whatever would happen.  It hadn’t been bestowed upon me by any outside divine being.  It was flowing through me.  I bowed down to Swamiji as usual to show my respects.  We talked about casual things and ate something small together.  Then I told Swamiji I didn’t know when I would see him again, so wanted to say thank you for everything over the years.   I was going back to the US in a few days.  His voice quivered as he said, “We’ll see each other again.”  I gave him an unprecedented hug and tears flowed down my cheeks as I left.  A voice inside me said, “Thank you God.  I am free again.”

There comes a point on the spiritual path where some of us need to find our way more independently.  I wish I could say that the inner path is easier, and I don’t go through periods of doubt, but I do sometimes.  Time spent in meditation and self-reflection pave the way for making our intuitive voice more possible to follow, so that we can live life in more freedom and sovereignty.

Deanne Kaye has been on the healing path for over 30 years. She has explored traditional and alternative ways for healing and has been helping others since 2015 become free from such emotions as abandonment, shame, guilt, anger, self-loathing, fear, resentments, addictions and anxiety.  She provides experienced guidance, step by step work, meditation practices and a space of trust and presence for releasing unhealthy thoughts and emotions.  Thewayoutforhealing@protonmail.com