State of Change by Nowick Gray 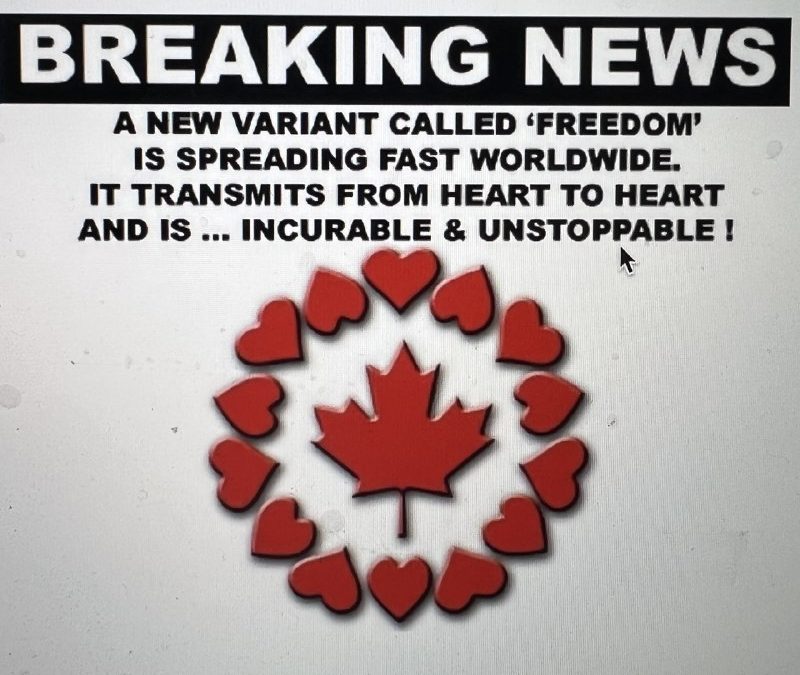 Every day now brings a deluge of new developments, as the movement against tyranny gathers momentum and meets desperate resistance from the rabid Resetters, whose control over the leverage of public opinion slips out of their grasp. In Ottawa the mainstream press and the politicized police resort to trumped-up charges of insurrection—er, mischief—which is to say, bouncy castles for kids and street music to warm the hearts and feet. Every day while governments vax younger and younger children with deadly results, more citizens arrive to say, “No more!”

A sample of relevant storylines follows: 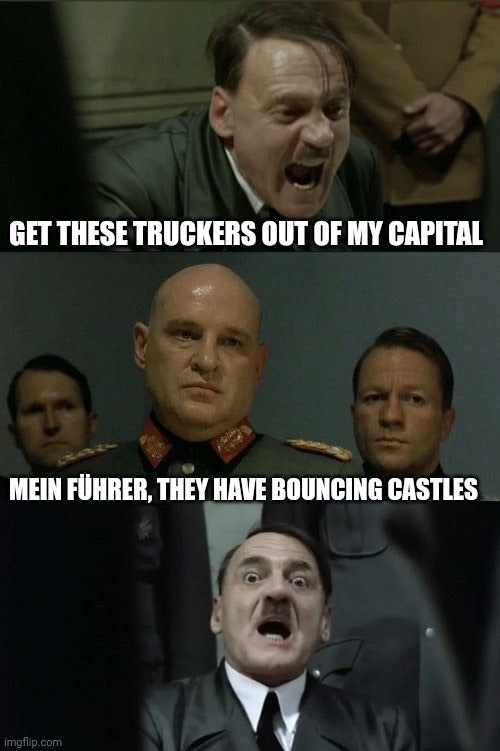 Our Time Has Come: Convoys in Video

‘This is a nationwide insurrection. This is madness. We need a concrete plan to put an end to this,” said the chair of the board, Ottawa City Council member Diane Deans…. “There are so many people out there engaged in a broader act of… mayhem, that we need to be able to bring it all under control,” she said. “We can’t allow this kind of terrorism in our community to continue this way.”

‘Right now, this is a Mexican standoff. The government can’t possibly roll back their measures at the behest of protesters, or the whole entire concept of an authoritarian democracy collapses. If they bend at all, then no one is going to ever follow their brutal dictates ever again.’ After overwhelming criticism, GoFundMe has relented and is giving back the $9 million it stole from the Freedom Convoy. That attempted power grab is a warning shot from the financiers of the Great Reset, who seek total digital control over the behavior and choices of the new serfs.

‘Today it is GoFundMe. In the future, when central banks roll out Central Bank Digital Currencies (CBDCs), it’ll be all economic activity that falls within the purview of national and Supra-national government and bureaucracy. When those days arrive, everybody who will be reliant on government economic entitlements will be enduring a type of neo-Feudalism: veritably digital slavery.’ —Mark Jeftovic 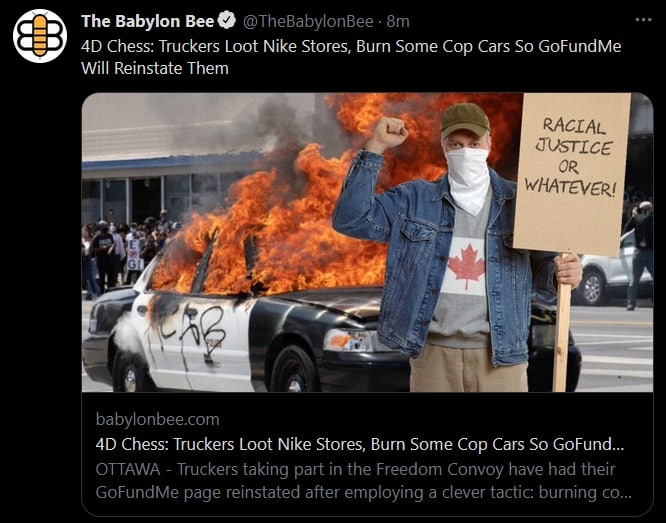 “the primary purpose of language – which is to describe reality – is replaced by the rival purpose of asserting power over it.” —Roger Scruton 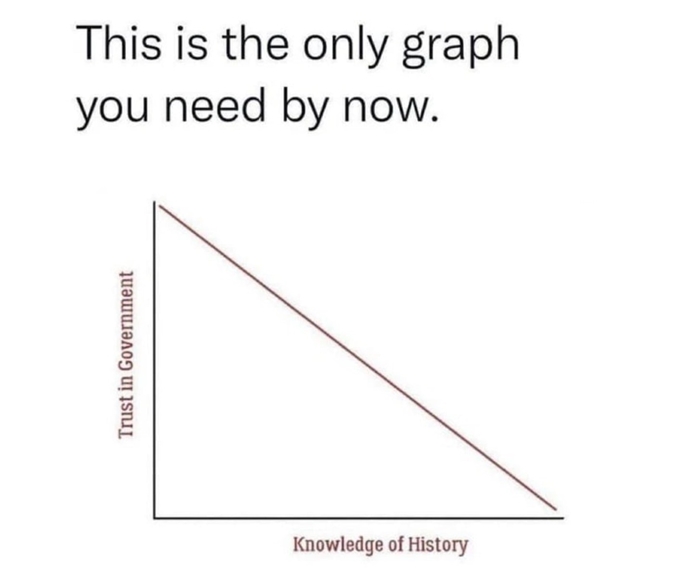 ‘Whenever the government of the United States shall break up, it will probably be in consequence of a false direction having been given to public opinion. This is the weak point of our defenses, and the part to which the enemies of the system will direct all their attacks. Opinion can be so perverted as to cause the false to seem true; the enemy, a friend, and the friend, an enemy; the best interests of the nation to appear insignificant, and the trifles of moment; in a word, the right the wrong, the wrong the right. In a country where opinion has sway, to seize upon it, is to seize upon power. As it is a rule of humanity that the upright and well-intentioned are comparatively passive, while the designing, dishonest, and selfish are the most untiring in their efforts, the danger of public opinion’s getting a false direction is four-fold, since few men think for themselves.’ —James Fenimore Cooper, quoted by Matthew Ehret 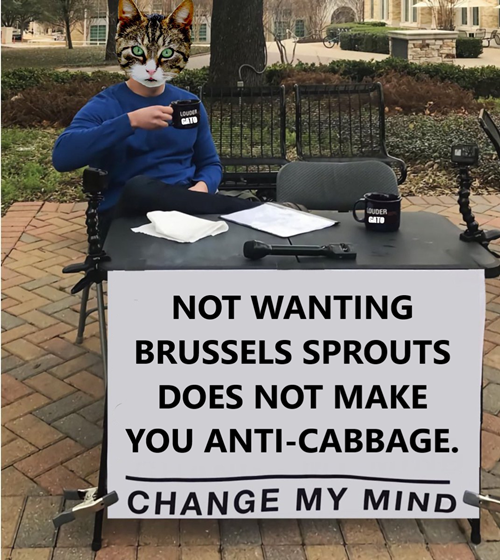 ‘this was not “warp speed” is was “warped science” and now we reap the bitter fruit.’ —el gato malo 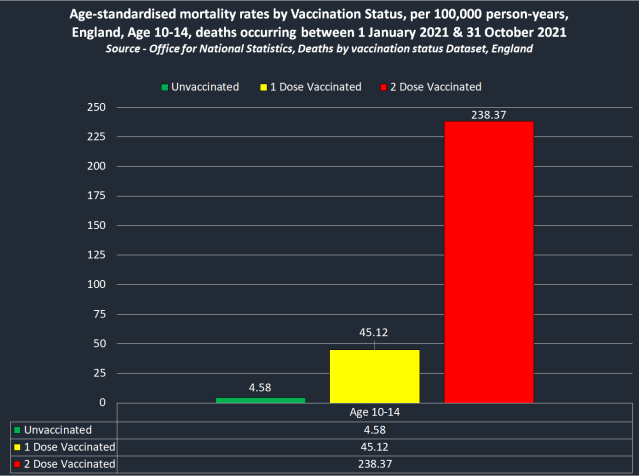 Life is more ironic—or more darkly comic—than fiction. People magazine reports that comedian Heather McDonald fainted onstage, fracturing her skull, after joking about her recent jabs: “Audience members told TMZ that the comedian collapsed after making a joke about being ‘vaxxed, double vaxxed, boosted,’ leading many to initially believe it was part of the act.” 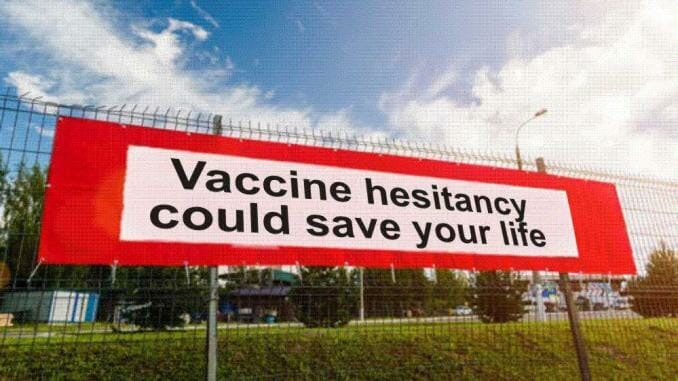 Liberty and Justice for All

Launch of the Lifeboats 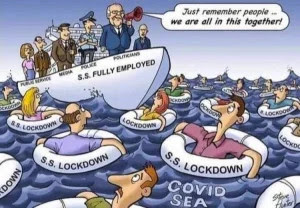 What remains to be said, and brought to light? Narrative 2.0 is well underway now, the old paradigm crumbling, rats scurrying for cover. The Truckers and their legion of awake citizens aren’t buying the mainstream media lies anymore. We are destined for…

Revolutions do not happen overnight. True revolutions are not mere turnings of the wheel; they are new worlds birthing. This revolution, as prophesied, is not televised per se, but gone viral nevertheless in independent social media.

Meanwhile the Rat Captains will try to send us all down with their sinking ship, while they skip off to their fortified retreats.

We have known for some time it would come to this: Us or Them, the Endgame, the Final Battle. Who knows what their last play in despair will be… to flip the whole board over? Indeed, it is tipping anyway. The question remains, who will survive, to fulfill necessary justice and secure freedom for future generations? 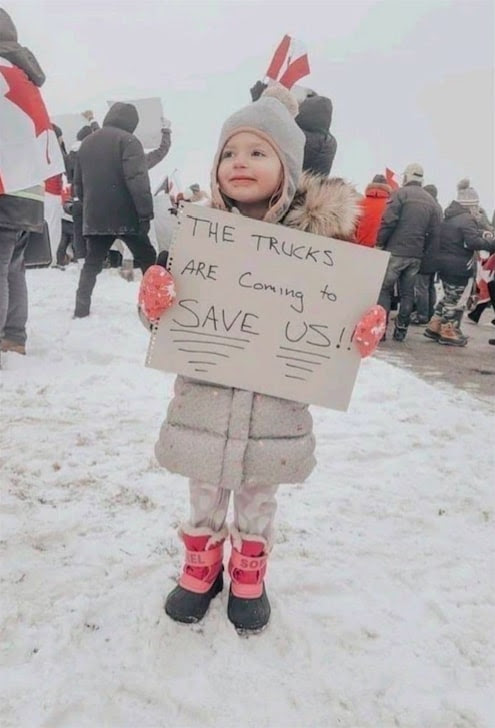