The Art of Animism: The Frog, The Duck, and The Fox 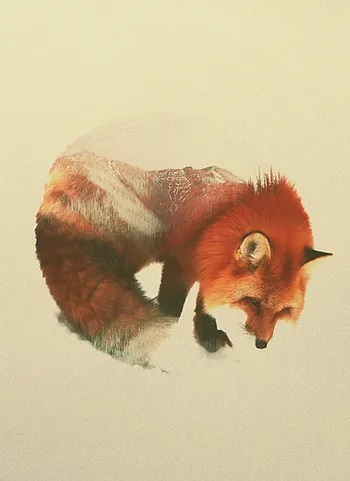 The Art of Animism: The Frog, The Duck, and The Fox

“A person is neither a thing nor a process but an opening through which the Absolute can manifest.” ~Martin Heidegger

You are a multifaceted animal. All humans are. You contain millions of years of evolution inside you. Other animals can only instinctually feel this. You, on the other hand, can embody it. As a symbolic creature, you can subsume other animals through archetypes. Through animism, you can dare to don a wolf-mask, a whale-mask, or a crow-mask.

All you need is your imagination. You are free to be whatever you want to be. Be unconventional. Be eccentric. Be as crazy-beautiful-bizarre as your delicious imagination can dream up, and then dance it into self-actualization.

Animism is using animal symbolism as an animating principle to create wholeness. In this article we will focus on the frog, the duck, and the fox as animal archetypes that you can use to animate your life and become more whole.

Be the frog (adapt and overcome):

“All fixed set patterns are incapable of adaptability or pliability. The truth is outside of all fixed patterns.” ~Bruce Lee

There’s a reason why Navy S.E.A.L.’s call themselves frogmen. Frogs are the ultimate adaptable animal. They are born in the water, they thrive on the land, and they hop through the air. They overcome obstacles. They defy the odds.

Frogs exist outside of fixed patterns. This gives them an outside-looking-in perspective, and the advantage of thinking outside the box.

Frogs are masters of camouflage. They blend in. They become water, earth, wood. They are in the muck and mire reverse-engineering snares in the dark. They are in the Underdark transforming shadows into luminescent light. They slip in. They slip out. They take on the burden of mutability.

When you become the frog, you are becoming mutable, changeable, flexible, transformable. Most importantly, you become teachable. And in a world that is deadest on what it has already learned, being teachable is a superpower. This superpower leads to the ability to self-overcome, which leads to the bridge that the frog shares with the duck: detachment.

Be the duck (detach and let it slide):

“When men are men of the world, hard words run off them like water off a duck’s back.” ~Charles Kingsley

You’ve probably heard the idiomatic expression “water off a duck’s back” in reference to things easily shed. It’s a stoic term representing the strength of character it takes to deflect insults, negativity, and hardship.

Being the duck is the ability to be steadfast in a storm. When it rains it pours, but when you are the duck, the rain simply falls away. You’re not fazed by the storm. You cut through it like a sharpened keel through rough water. You’re able to keep things in proper perspective. This keen perspective leads to the ability to detach in a healthy way.

Being the duck is more than just the ability to “let it slide,” it’s also the ability to rise above it. As soon as the “water” (insult, negative energy, or hardship) rolls off the ducks back, it takes flight, soaring above and beyond, gaining the bird’s-eye view, seeing with “Over Eyes.”

And in a world that is deadest on being attached to whatever religion, politics, or worldview its culture has conditioned it to believe in, healthy detachment is a superpower. This superpower leads to the bridge that the duck shares with the fox: Flow.

Be the fox (misdirect and go with the flow):

“As soon as the generals and the politicos can predict the motions of your mind, lose it. Leave it as a sign to mark the false trail, the way you didn’t go. Be like the fox who makes more tracks than necessary, some in the wrong direction. Practice resurrection.” ~Wendell Berry

Fox represents extreme cleverness and cunning which has led to the expressions, “sly as a fox” or “outfoxing.” Being the fox involves misdirection, unpredictability, and the ability to see through deception. It symbolizes keen observation, deep integration, and the ability to out-trick tricky situations.

Fox is the ultimate trickster. Being the fox is finding a way to playfully distract yourself from your seriousness so you can get your curiosity ahead of your certainty. The fox tricks the Self out of delusion. It has the power to break the spell, to loosen the grip, to unfix fixed thinking. It can slip beyond the conviction of cultural conditioning and enter the inner tomb where the hero is pretending to be asleep.

Being the fox is the ability to invert the world; to reveal the underlying essence; to dig up the roots. You become the fox to sidestep sycophantic ideology, religious indoctrination, and political claptrap. You do this in order to rediscover the natural order, the cosmic construct, the universal laws, and the flow state hidden beneath the many layers of cultural conditioning.

Once you’ve inverted the world you awaken the warrior within. The world opens wide. Self-mastery becomes a possibility. And in a world that is deadest on thinking inside the box of its own worldview, inverting worldviews is a superpower. This superpower leads to the bridge that the fox shares with the lion: Courage.

This article (The Art of Animism: The Frog, The Duck, and The Fox) was originally created and published by Self-inflicted Philosophy and is printed here under a Creative Commons license with attribution to Gary Z McGee and self-inflictedphilosophy.com. It may be re-posted freely with proper attribution, author bio, and this statement of copyright.