The Net and the Open Sky by Nowick Gray

The Net and the Open Sky

The Net and the Open Sky 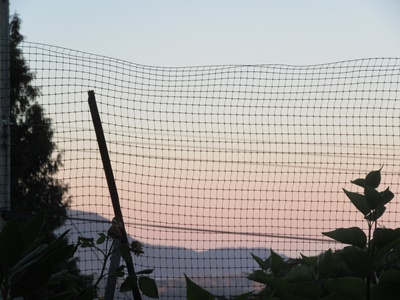 News is dire, prospects bleak. The reset button has been pushed; programs activated, policies unrolled. Millions march in protest; media ignores. What planet are they representing?

It’s good to know the grid, and not to get caught. To wriggle through, swim under, fly past. We are not the net. We are more than sky. We are the witness, the net and the open sky.

Rock Above the Tide 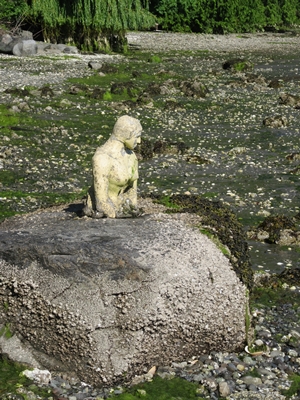 We perch on the rock above the tide. A platform of stability, a throne of simplicity. Tide comes in, sweeps refuse at our feet. Tide drains out, leaving messes: strewn seaweed, dead crabs. We abide.

Looking out over the bay, we gaze at boats as they come and go. Lazily, steadfast, churning, loud, lost and found. The carnival, they signal, has been shut down. Is there safe harbor here?

We sit mute upon the rock, gazing. We hear the rumors of war, we see the toxic ribbons overhead, we taste the poisons in the tide. We abide.

Can we relive what is lost? Can we dream of a life beyond this embattled shore?

The tide rolls in, slips out. We once were captain of this ship, but it has run aground. 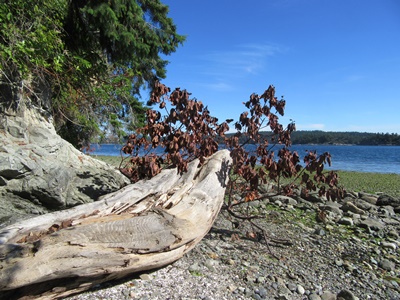 In this dead wood I see a bird wing. Am I deluded? It’s June, but the branches show red, dead leaves. The rocks on the shore show no obvious compassion, but infinite patience. They have their own tales to tell, far more ancient. Me? I try to discern what happened, what is possible now.

This chunk of wood… is that all it is now? Once thriving, a matriarch of the forest. Now a sculpture, reminiscent of birds who once sang in those very branches. The wind and water made this wood live again, suggesting flight. Or is such flight only what I imagine? Does it matter, while dead leaves redden in the caustic light? And tell me, if there is no wing, no bird in the sun-parched wood, what then?

Call of the Eagle 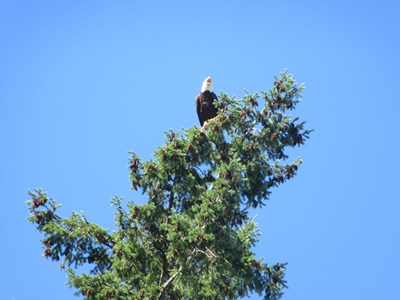 Eagle swoops and dives behind me, buzzing my head with prickles of danger. A screech as it flies over, chuckles as it circles back, harries again. I must be near its nest, though a hundred feet down.

That’s fine, I acknowledge. I’m just passing by. I’m a pretender in this wild land, a taster of the shore. What can you teach me, noble lord?

Care for your nest. Train your young. Steer clear of the nets. Sing your prayers to the open sky. 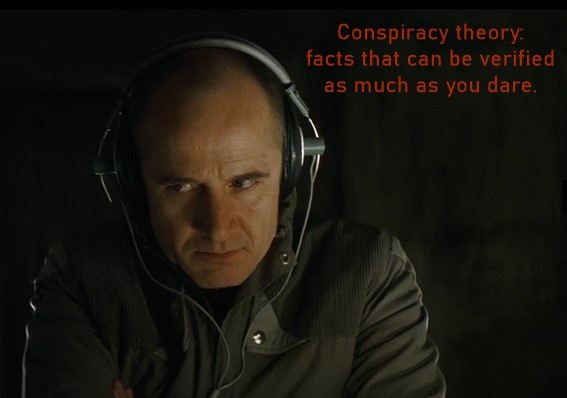 “A top WHO official says that mask mandates and social distancing should continue indefinitely in order to protect against new variants of COVID-19…  Several government advisers have called for coronavirus restrictions to continue forever.” —Paul Joseph Watson

Leaked Docs On Permanent Lockdown of UK in 3 weeks 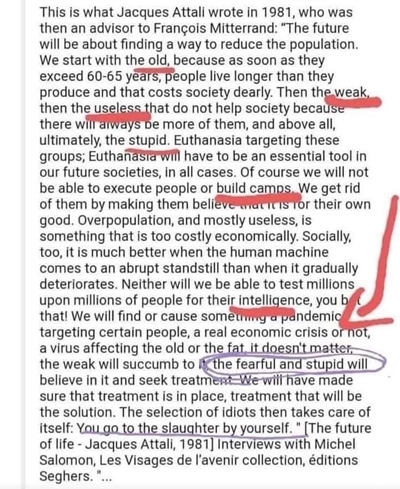 Email from Imperial College’s Neil Ferguson lays out in stark transparency the elite agenda to force reset on Britain over the coming months. Resistance, they say, is futile, provided the plan is backed by sheeplike compliance by the majority, following media and government complicity. The plan as advertised echoes the Liberal Party of Canada leak of last fall, outlining the selfsame totalitarian control we have been subjected to in real time, step by step. It’s also reminiscent of an even darker vision going further back, to 1981: 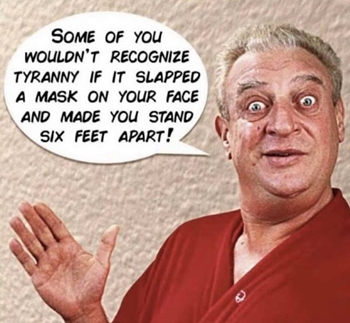 “The ultimate goal of every totalitarian system is to establish complete control over society and every individual within it in order to achieve ideological uniformity and eliminate any and all deviation from it. This goal can never be achieved, of course, but it is the raison d’être of all totalitarian systems, regardless of what forms they take and ideologies they espouse. You can dress totalitarianism up in Hugo Boss-designed Nazi uniforms, Mao suits, or medical-looking face masks; its core desire remains the same: to remake the world in its paranoid image … to replace reality with its own ‘reality.’
“…For a time, the society is split in two, as the two ‘realities’ battle it out for dominance. ‘Reality’ being what it is (i.e., monolithic), this is a fight to the death. In the end, only one ‘reality’ can prevail.
“This is the crucial period for the totalitarian movement. It needs to negate the old ‘reality’ in order to implement the new one, and it cannot do that with reason and facts, so it has to do it with fear and brute force.… They know the facts contradict their narratives. They do not care. They do not have to. Because this isn’t about facts. It’s about power.
“…. Your non-conformity represents an existential threat to [the propagandized masses]… a negation of their new “reality” and a reminder of the reality they surrendered in order to remain a “normal” person and avoid the punishments.”
–C. J. Hopkins, Manufacturing (New Normal) “Reality”

Despite the Discourse Engineering, “Reality Will Always Win” 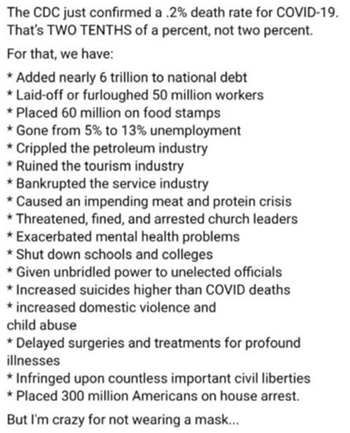 “Some of the requisite courage to resist can be found by remembering that the pseudo-reality is not real, its paralogic is not logical, and its paramorality is not moral. That is, it’s not you; it’s them. Some more backbone can be dredged up by realizing that once the pseudo-real begins displacing the real for even a few percent of the population, the question is no longer whether things will go bad but how bad they will go before the bubble bursts. Reality will always win, and calamity comes in proportion to the size of the lie between us and it, so it is better to act sooner than later. Still more heart resides in grasping that it gets worse right up until a real resistance mounts, and then, after a rocky transition, it starts getting better. The time to act is therefore now.”
—James Lindsay, Psychopathy and the Origins of Totalitarianism

The Human Hive Mind & The End Of Individuality 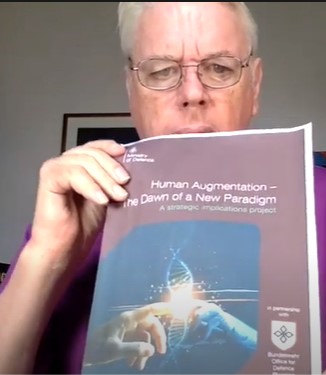 In this video David Icke dispels the “conspiracy theory” smokescreen with a breakdown of a document published by the UK Ministry of Defence and German military, called “Human Augmentation: The Dawn of a New Paradigm.” The cover image corrupts DaVinci’s iconic touching of the fingers of Adam and God, by substituting a transhuman artifact for God.

This is the blueprint for our engineered future. All for our benefit, of course—explicitly, our “augmentation,” our “enhancement” with “synthetic biology.”

What is so inexplicable about such a vision is how “virtual” is supposed to improve on “reality.” But that’s precisely the con, the hope: to purportedly circumvent the suffering, limitation, and even death that real life entails. Trouble is, it’s an empty dream, a false heaven, a distraction and an opium of an already info-drugged and tech-dependent populace.

It might all be a sham and a scam, but for those purveying this new world makeover, it’s a deadly serious business, ratcheting full speed ahead.

“It’s happening; and we have to address it,” Icke concludes. His preventive solution is simply stated: “Refuse to cooperate.”

“Those who refuse and resist face two choices: be forced off-grid when the new currency becomes unavailable because we will need vaccines to work, bank, and shop. You will not be able to pay your mortgage and will lose your home…. Or we unplug from the technocratic slave matrix on our terms….
Many of us as preppers have long predicted these days, and they are here…. Act accordingly.” —Kratos, Are We Overdosing on “Hopium”?

“In the present situation, we have COVID vaccines. They’re being injected all over the world. Women are making reports of bleeding, disrupted menstrual cycles, miscarriages, pre-term births.
There is a long history, extending to the present day, of elite groups researching and deploying vaccines designed to terminate pregnancies, for the purpose of depopulation.
“The elite groups and players behind the current ‘pandemic—the WHO, UN, Bill Gates, Rockefeller Institute, etc.—are the same groups who have been developing depopulation vaccines.”
—Jon Rappoport, The COVID vaccine and depopulation; the beginning of the trail 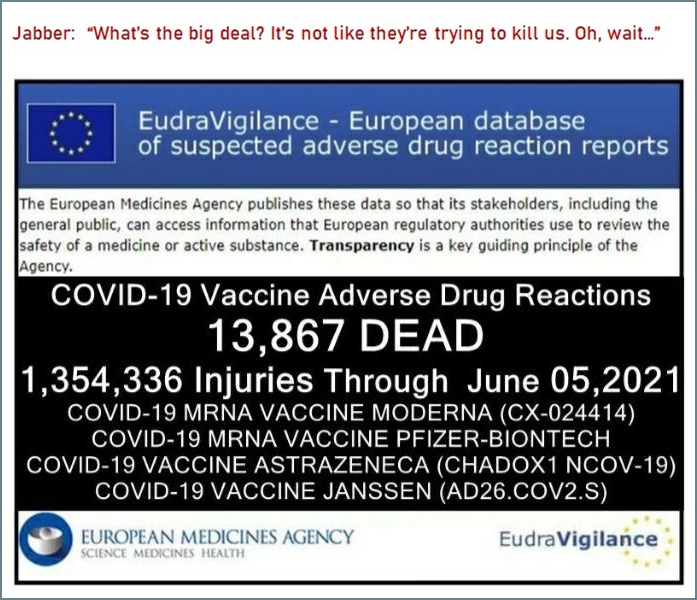 “We are in a spiritual war for the soul of the world.”

“I do not know why so many good people cannot see through this evil. I can only attribute it to having been seduced by a massive hypnotic propaganda campaign that has appealed to their deepest fears and will result in those fears being realized because they thought they were free. It is a great tragedy.
“…  But in the end, after much suffering and death, the truth about this evil agenda will prevail and there will be much weeping and gnashing of teeth.”
—Edward Curtin, What I Know and Don’t Know about SARS-CoV-2 Virus

Our human future was never guaranteed. That’s something we forgot along the way toward a materialist’s paradise. Our comfort was always paid for on borrowed time. From the megafauna extinctions of the Ice Age, to the hybridized grasses of the Middle East; from the toxic “Green Revolution” of the 1960s to the unreported genocide of vaccines and their nanobot successors.

And now? The net of the nonhuman agenda is closing in. In the name of saving ourselves, from ourselves, we are being sacrificed for others. Of alien origin, or alien intent, what’s the difference?

Humans may be gullible, but we are still human. Our future might be hijacked, if the transhumanist predators get their way. But that is not our way. We recognize their magic cloak of connectivity for the fatal snare it is, and step aside from that closing net. We see past the trails of confusion traced across our skies, intuit truth outside their web of lies. We persist. We resist. We dare to stake our claim to a future still human: a future of, by, and for this our only Earth.

Nowick Gray writes from Salt Spring Island, BC. His books explore the borders of nature and civilization, imagination and reality, fiction and nonfiction. Connect at NowickGray.com to read more, and sign up for the “Wild Writings” email newsletter for updates and free offers. A regular contributor to The New Agora, Nowick chats with Lorenzo in this video interview about his life journey to manifest truth and freedom.