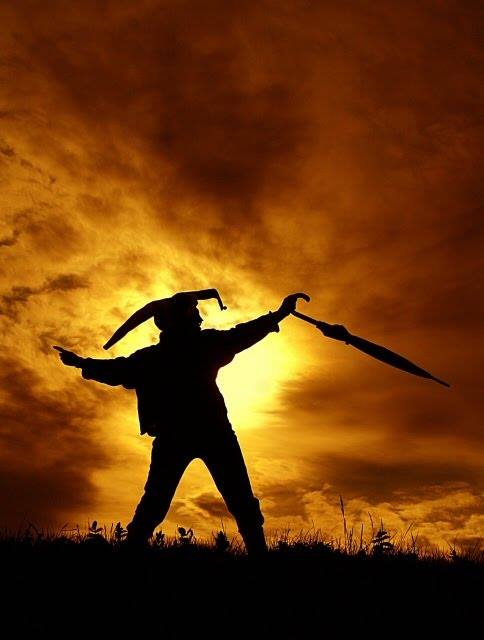 Trickster is hunting you. Yes, you. He is the primordial hunter, the perennial fisherman. Hunter, tracker, predator, seeker. He (or she) is the only hunter for which everyone is his kill. None of us are off the hook for being hooked by this fisherman par excellence. But for those of us with the capacity to tap into this elusive energy, this mercurial metaphysics, it can be nothing short of magical.

Trickster is the tug-o-war rope between heaven and hell. Sometimes heaven wins. Sometimes hell wins. But most of the time Trickster wins, pulling heaven and hell together into a transformative harmony of opposites. Really, Trickster always wins. For he is the human personification of reconciled opposites, the ultimate catalyzing agent, within whom summit and abyss, shadow and light, life and death, are all united.

“We are creatures born of heat and pressure and grinding, ceaseless movement. To be still is to be… not alive.” ~N.K. Jemisin

Whether it’s turning demons into diamonds or wounds into wisdom, Trickster bridges gaps. From low to high and back again. From abyss to summit and back to equilibrium. Trickster transforms roots into branches through the shock and awe campaign of upsetting the Tree of Good and Evil itself.

With blitzkrieg happiness he flies to the highest heights, weaving through the branches of big-life and tiny-death, only to dive down into the earth to get tangled up in the roots of big-death and tiny-life. Flipping all scripts, yanging all yins and yinning all yangs, he tricks God into tripping into the Greater Mystery of an unexplainable reality.

Tapping into this primal energy fuses spirit with vicissitude by lending us a good sense of humor in the face of the cosmic joke. The whetstone lows lead to razor sharp highs. The obstacle becomes the path. The debris left behind by the destruction of the setback (whatever it was) is gathered up and pieced together into a transcendent steppingstone that can lead to ever-higher transformational heights.

Just remember: Trickster rules. The higher the heights the harder the fall. It’s an existential rollercoaster ride. Either way, high or low, Trickster will be laughing at us the entire time.

“If you really want the truth, you need to escape the black hole of power and allow yourself to “waste time” wandering here and there on the periphery. Revolutionary knowledge rarely makes it to the center, because the center is built on existing knowledge.” ~Yuval Noah Harari

The center of existing knowledge is an intellectual comfort zone that Trickster is constantly in the throes of stretching. The periphery is his stomping ground. He is the ultimate periphery keeper, transforming boundaries into horizons since before there were words for it.

Before knowing, there is not knowing. Once you know that you know next to nothing, you can authentically say you have begun the path toward true knowledge.

Trickster metaphysics teaches us this vital wisdom. Willful ignorance is put on blast on one end of the spectrum, while the Master Complex is put to the fire on the other. The only answer is to question. The only absolute is that there are no absolutes. And even that is not an absolute.

“He who makes a beast of himself gets rid of the pain of being a man.” ~Samuel Johnson

Trickster is the enemy of all boundaries. He is betwixt and between all moral and ontological categories. He is beyond good and evil, beyond notions of rightdoing and wrongdoing, drunk and dancing in a field with Rumi and Nietzsche. He is an amoral agent par excellence, laughing at all tragedies, whether real or imagined.

Tapping into Trickster metaphysics is becoming an amoral agent for the greater good, even if that means upsetting the “greater good.” Trickster tricks immorality into morality through amoral means, thus preventing immorality from ever taking root while also creating an ever-evolving meta-morality that’s flexible enough to change through the passage of time, heralding Lowell’s wise words, “Time makes ancient good uncouth.”

Amoral robustness implies shadow reconciliation. Thus, one is capable of utilizing the full range of the human condition to keep the culture and the self in check. Whether as a beacon of light in the dark or a beacon of darkness in the blinding light, a person using trickster metaphysics is the ultimate cultural leveling mechanism.

“It is all my art and aim to compose into one and bring together what is fragment and riddle and dreadful chance.” ~Nietzsche

Trickster reminds us that norms exist only in chaotic tension with non-norms. Everything is in flux. The only thing that doesn’t change is change itself. Trickster puts everything on blast, but especially entrenched power and stuck-in-the-muck conformity. The existing order must be challenged lest power corrupt.

Trickster has the audacity to challenge all powers, all perceived order and arbitrary law. Anything not in alignment with universal law is desecrated, ruthlessly reconciled, and then subsumed into a higher order: a new way of being human in the world.

Personifying the unity of opposites:

“Trickster reminds us that when talking about ontological primary realms (like creation stories and big bang theories), we are invariably forced into expressions of coincedencia oppositorum, a unity of opposites.” ~Louis G. Herman

Humans are paradoxical animals torn between spirit and flesh. We are the animal of opposites. Civility and wildness, knowledge of good and evil (life and death), ideals of mortal and immortal aims, all wrestle together inside us.

Trickster metaphysics reminds us that we are extradimensional. We are the animal that knows that it knows, caught up in our own metaparadigm. This creates all matter of anxiety and insecurity. But it also creates humor and the ability to internalize the universe, what Joseph Campbell called “the inner reaches of outer space,” or the inner universe of outer cosmos. We are the pivot point for the universe to “know” itself.

Trickster metaphysics just gives us permission to be aware in a way that frees us to play with our own opposing nature. It allows us to not take ourselves, or our ideals, too seriously.

Everything is transitory. Life is procrastinating compost. But meaning can be found through the laughter and play and high humor of trickster existentialism; the metaphysics of which trumps the physics of the transitory by creating meaning despite meaninglessness.

In the end, Trickster laughs at the cosmic joke because he realizes that he is the punchline and there is no way out except through existential flexibility, masochistic laughter, and high humor.

And so, Trickster tricks himself. Humanity tricks itself. The universe tricks itself into constant transformation. Fiery hell is dragged into heavenly waters by Trickster’s mighty noose. The aftermath is a steaming synthesis of thesis and antithesis. A primordial playground emerges where all paradoxical beings are free to play out their tragicomic lives in joy and high humor, despite the cosmic joke.

This article (Trickster Metaphysics: Transforming Anxiety into Artistry) was originally created and published by Self-inflicted Philosophy and is printed here under a Creative Commons license with attribution to Gary Z McGee and self-inflictedphilosophy.com. It may be re-posted freely with proper attribution, author bio, and this statement of copyright.